Svalbard is one of the best places to visit the Arctic, being so easily accessible by air and blessed with spectacular scenery and abundant wildlife from the Far North. Here are six amazing locations you may see on an expedition cruise to this High Arctic wilderness.

Half-way from the North Cape to the North Pole, Svalbard is a wonderland of spilling glaciers, glittering icebergs, and spans of snow-swept tundra.  It is home to humanity’s last-ditch supply of crop seeds the Svalbard Global Seed Vault, the world’s northernmost settlement Longyearbyen, international Arctic science missions, relic Russian coal mines - and is one of the best places on the planet to spot a polar bear! Not to mention Arctic foxes, dozing walruses, and swirling flocks of seabirds. To see the best of the Arctic you really should travel to Svalbard – and take an expedition cruise out into its Arctic wilderness with some or all of the following six amazing locations on your itinerary: 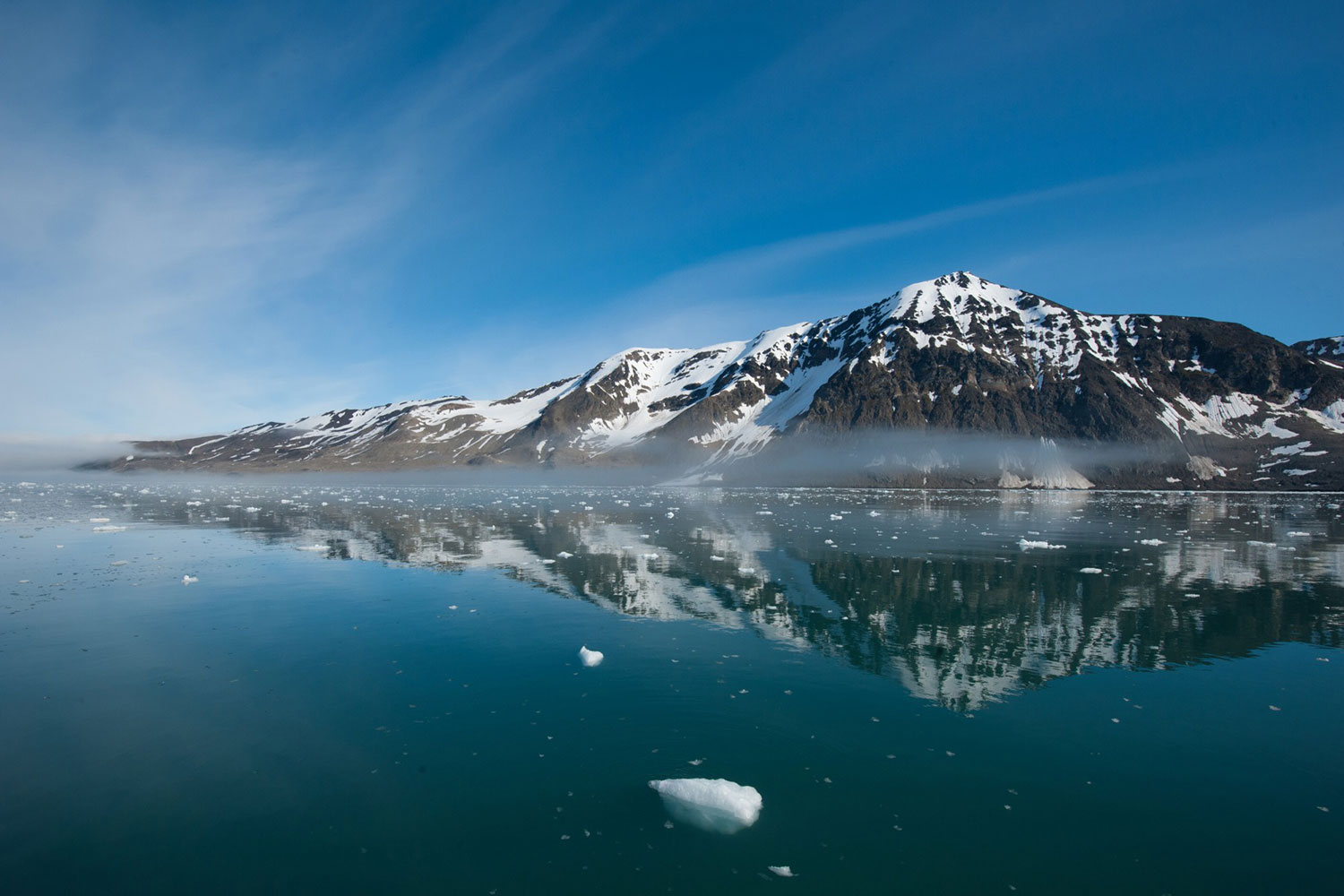 Combining beautiful tundra landscapes to the north with lofty mountains to the south, Liefdefjorden is among Svalbard’s most scenic landing sites. Your visit will not only introduce you to several gigantic glaciers, but you may also see seals or even a polar bear.
Liefdefjorden means “The Love Fjord”, to honour a Dutch ship that passed through the area with the name Liefde. The bay has had multiple names over the years, all of them pertaining to love – Baye d’Amour, Kjærlighedsbugten, Porto detto l'Amato, Liefde Bay, and Love Bay.

Liefdefjorden offers the majestic beauty of one of Mother Nature’s greatest works of art – the glacier. Most of the area is part of the protected Northwest Spitsbergen National Park. It’s a land of rolling reddish-brown hills that lead the way to snow-capped mountains found further inland. The dark waters fill with blue-white ice and mini-icebergs as the summer warmth calves the nearby glaciers. On the northern coast of Svalbard’s main island of Spitsbergen. Despite its far-northern location, the area enjoys some warmth from the Gulf Stream, so the bay usually opens up fairly early in the summer season. 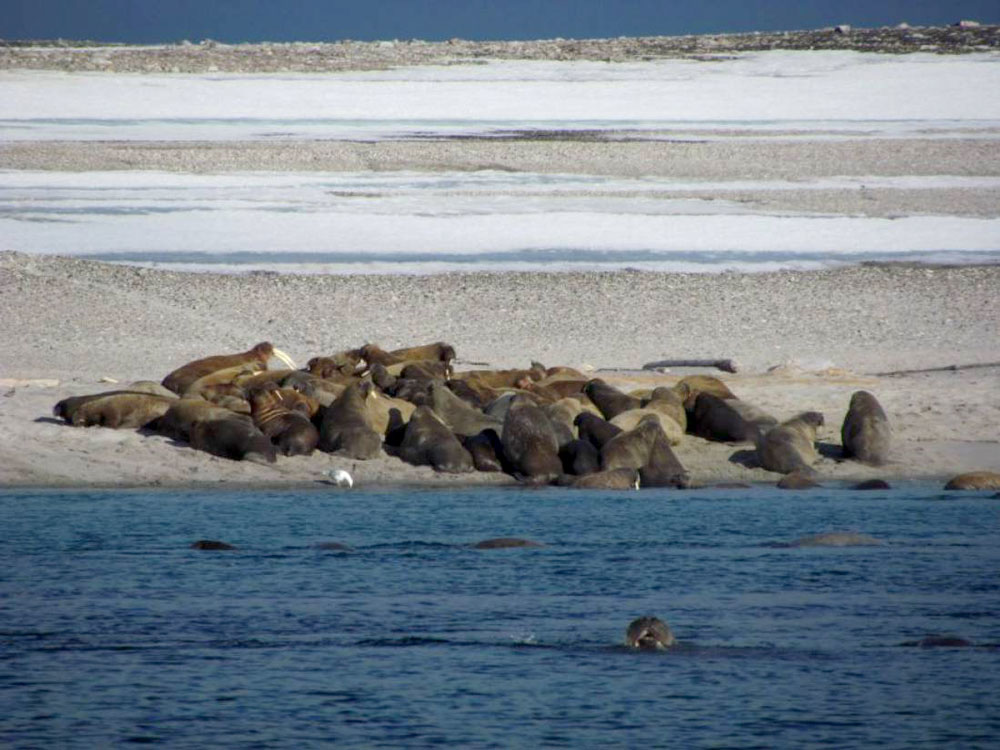 Phippsøya is the largest of the Sjuøyane, the “Seven Islands” that make up the northern-most part of the Svalbard archipelago. Phippsøya is a harsh high-Arctic region where life has to fight to survive. Walruses are often seen on the beaches, making for some fine pictures to bring back home.

Located just 1040 km from the North Pole, Phippsøya shares a number of characteristics of the far-northern climes – desert-levels of precipitation and low-slung clinging plant life. However, due to some fortuitous warmer currents the island also enjoys some of the benefits of a sub-Arctic location. Because of this combination of high-Arctic and sub-Arctic conditions, on your Arctic cruise visit there is a great chance to see walruses, polar bears, and occasional puffins that make the island’s cliffs their home during breeding season.

Phippsøya is also home of some emergency huts built in the 1930s by the Norwegian government to provide safe refuges for Arctic explorers.  The Merckoll-huts are still standing today and can be seen by Arctic cruise visitors. 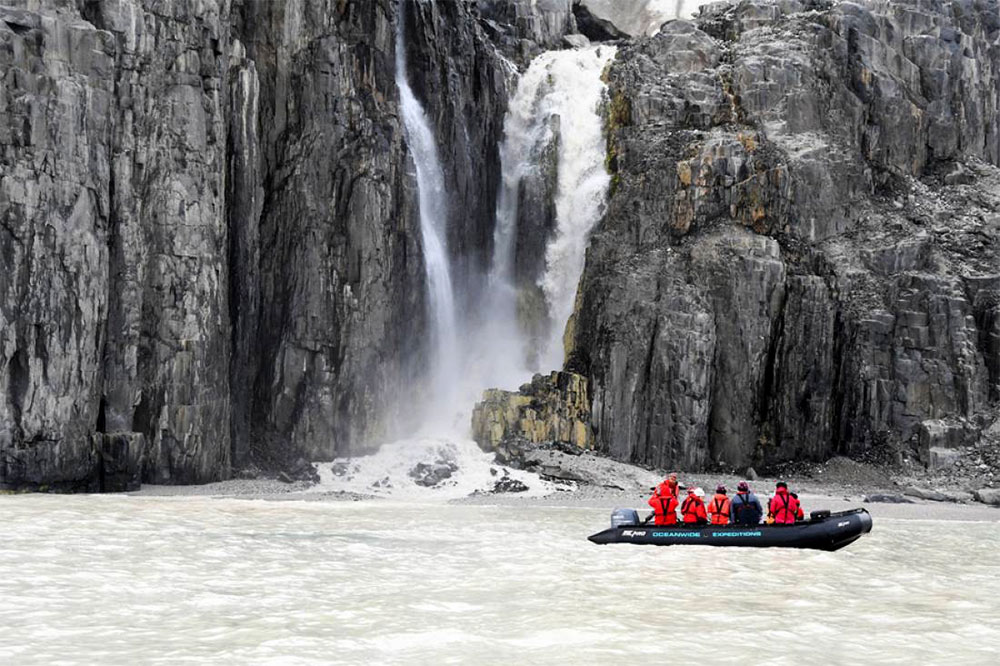 This is the most accessible (and stunning) bird cliff in Svalbard, with towering basalt columns and tens of thousands of breeding Brünnich’s guillemots. Make sure you bring a quality camera capable of shooting these fast-flying birds, as the photography opportunities here are rivalled by few other places. This popular Arctic location, which translates literally to “mountain of the guillemots,” is the most famous cliff of the Svalbard archipelago and one of the prime Zodiac cruise sites in Spitsbergen. Facing the often ice-filled Hinlopen Strait, Alkefjellet is a major bird cliff that is home to around 60,000 pairs of breeding Brünnich’s guillemots as well as a smaller number of glaucous gulls and kittiwakes. The cliffs are high and sheer and in places around 100 meters (330 feet) tall, some of them free-standing towers and others part of the main body of rock. All are impressive example of doleritic intrusions from the Jurassic or late Cretaceous period. At certain times of year, meltwater from glaciers can create small waterfalls that spill down the rocks in long clear streams, and occasionally visitors can spot Arctic foxes hunting for fallen chicks among the greener terraces of the cliffs. 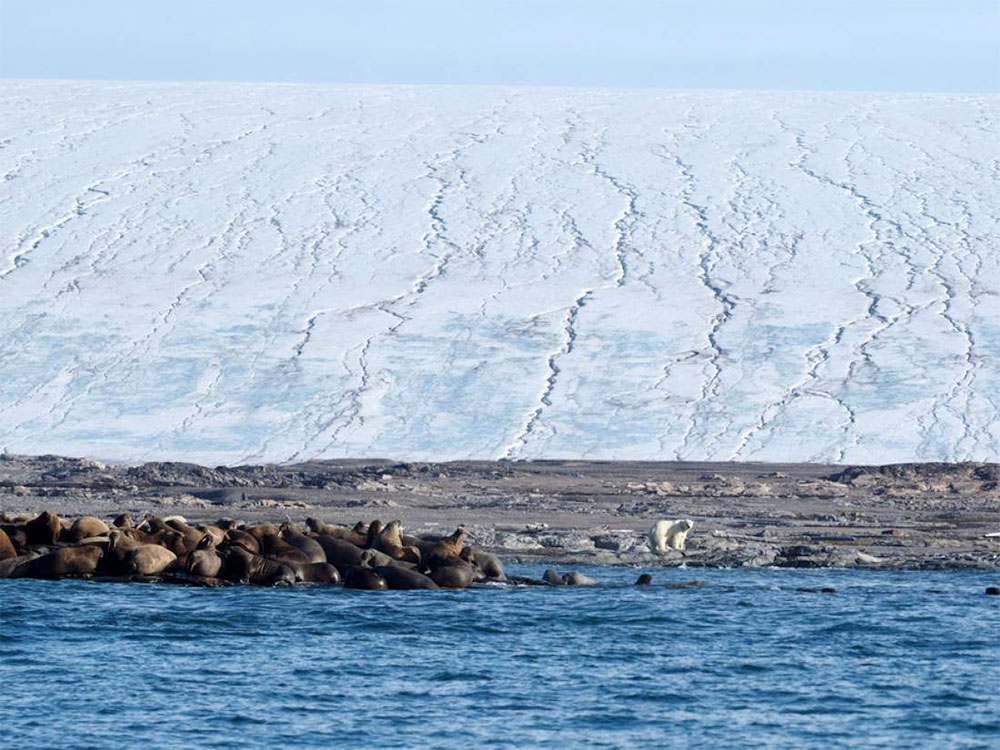 Remote Kvitøya (“White Island”) is located in the far north-east of the Svalbard archipelago, close to the Russian border. Arctic cruise passengers who visit the area are treated to the awesome spectacle of the ice-cap Kvitøyjøkulen, which covers 705 km2, with just a few pockets of ice-free land around the edges of the island. Despite the barren ice shield, wildlife is still plentiful on the few clear spots on the edges of the island. Birds that prefer flat lands for their colonies like Red-throated Divers and Arctic Terns arrive during breeding season. Polar bears are fairly common along the shores, and there is a robust walrus population (more females than males) that uses the region as a haul-out area.

The remoteness and sheer rugged severity of Kvitøya is truly stark. The island became the final stop for a hydrogen balloon crew in 1897, led by Swedish explorer Salomon August Andrée. Attempting to fly over the North Pole they had to set down amongst the Arctic pack ice, and travelled to the island on foot. No one knew of their demise on the island despite a large search and rescue operation. Not until 30 years later did a Norwegian sealer find the remains of the ill-fated expedition. A monument to the crew stands on the island today. The courage of the Andrée expedition crew is made hauntingly clear when you visit their old camp, now also their grave. 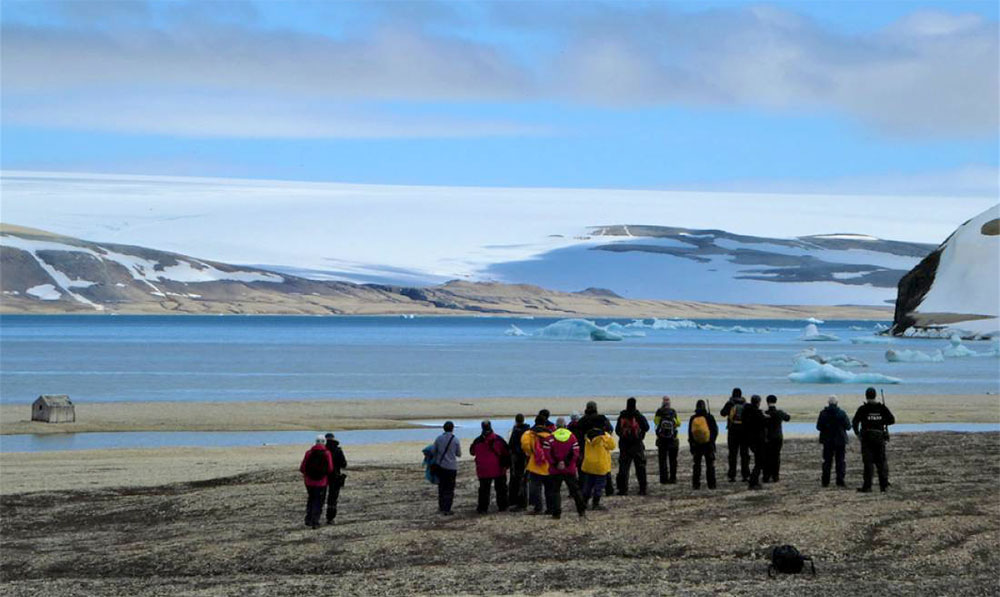 Palanderbukta is a bay located on Nordaustlandet in the Norwegian region of Svalbard, named after the Swedish captain for the first expedition (led by Nordenskiöld) to find the Northeast Passage. Often cut off by ice until late into the summer, Palanderbukta represents the chance for visitors to experience a region of the world that is rarely seen. The polar desert landscape is dramatic, featuring raised beaches, dazzling glaciers and stark ice caps. You may also encounter a number of invertebrate fossils during some excellent hiking.  Beyond the flattened shorelines (which make for easy hikes) the land curves up to be met by rocky towers, ex-mountains that have been ground down over time. We sometimes have the chance to witness icebergs calving from glacial ice cliffs. Plant life is hardy and in the minature, dominated by species like Purple saxifrage and the Svalbard poppy. Wildlife is more abundant, with the occasional polar bear wandering by, walruses hauling themselves up on ice floes in the bay, and some Svalbard reindeer. 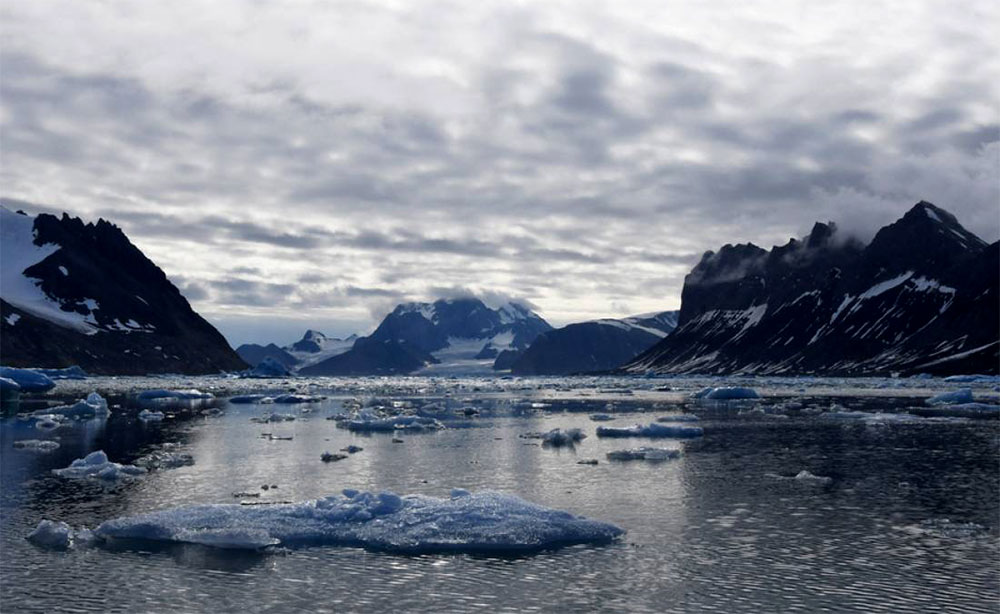 With majestic mountains and colossal glaciers everywhere you look, Hornsund makes a fitting conclusion to this list. The area is simply enchanting, providing you some of the Arctic’s most iconic scenery as well as glimpses into its whaling, trapping, and rich Pomor history.

Part of the South Spitsbergen National Park, the Hornsund is a fjord found on the west side of Spitsbergen, on the southern tip of the island. Some have claimed that Hornsund is one of, if not the, most beautiful fjords to be found in all of Svalbard. Opening into a number of beautiful sheltered bays, Hornsund offers Arctic expedition cruise visitor plenty of opportunities to explore. Landing points are somewhat spaced out due to the steep glacier and cliff walls, with some surprisingly green patches amongst the dark rock and snow thanks to all the fertilizer provided by the immense Auk colonies in the area. The area attracts Arctic foxes and reindeer and is a known crossing point for polar bear migrations.

The fjord has been home to the Polish Polar Station since 1957. The Station carries on a wide variety of experiments and data-collection endeavours from multiple scientific fields including recording atmospheric electricity, monitoring environmental build-ups of air and water pollution, geomagnetism, meteorology, and seismology. Historically, Hornsund used to be an active whaling zone in the 17th century. Remains of blubber ovens and whalers’ graves can still be seen to this day.

We hope this list inspires you to consider a cruise to Svalbard. All expeditions are of course unique according to weather, ice and wildlife opportunities. There are also many other fantastic landing sites in this wonderful Arctic archipelago. For more information, contact us at Expeditions Online and let us help you find and plan your ideal polar adventure!

People of the Far North