A vast, ice-covered continent, surrounded by stormy, icy seas - Antarctica is indeed a challenging place to reach!  Many people’s first reaction to the idea of actually visiting Antarctica is incredulous - why, isn’t it all just freezing ice and snow?!? Maybe that is an accurate description of the icy interior, however parts of Antarctica’s coastline boast a myriad of wildlife, spectacular scenery and at least in the summer, a relatively mild climate. Antarctica is in many eyes is the most wonderful and fascinating travel destination of all!

Antarctica is the coldest, driest, windiest and highest continent on earth. Uninhabitable to land animals it is paradoxically home to abundant wildlife during the summer season. The seas surrounding Antarctica are nutrient rich and support a huge biodiversity. Krill is the keystone species of the ecosystem and the source of food for whales, seals, squid, icefish, penguins, albatrosses and many other birds. Birdlife, including penguins as well as many seals use the Antarctic coast to haul out and breed during the summer, making them particularly visible to visitors. Although 98% covered with ice, there are many mountainous and spectacularly beautiful regions of Antarctica, particularly the coasts of the Antarctic Peninsula and Ross Sea.

These lovable, flightless mascots of the South, include 17 species (or 18, depending on who you talk to!) of which 7 are found in the Antarctic itself or the islands beneath the Antarctic Convergence. The rest of the penguin species are to be found in Sub-Antarctic Islands in the Southern Ocean, or cool water areas further North along the coasts of South America, New Zealand, Australia and South Africa. On the Antarctic Peninsula, the chinstrap, Adélie, and gentoo gather in enormous colonies during the summer breeding season. The largest species is the Emperor penguin: with a height up to about 1.1 m tall and weight of 35 kg or more. The smallest is the Little penguin (sometimes known as the Blue or Fairy penguin), which stands only around 40 cm tall and weighs about 1 kg. 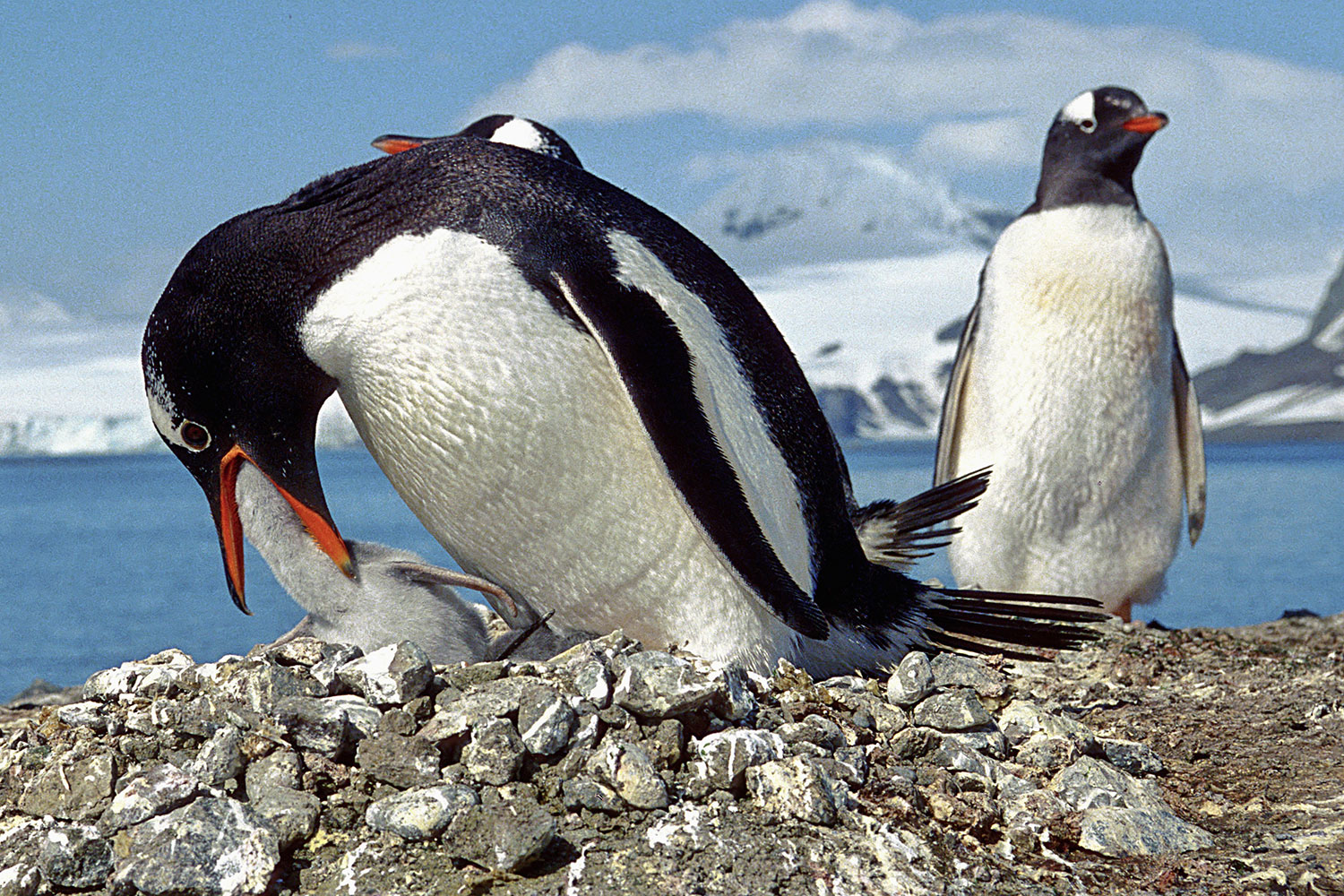 At least ten species of whales have been spotted in the Antarctic Ocean. These whales include humpback (the most common), minke, right, blue, sei, finback, orca, pilot, sperm, and southern bottle-nosed. The blue whale, the largest animal on Earth, exceeds 30 metres in length and weighs over 150 tons. Just as exciting to watch are the three species of dolphins—Commerson’s, dusky, and southern right-whale—that swim and dive in graceful arcs throughout the southern seas.

Six seal species thrive in the Antarctic Ocean. Watch crabeater and Weddell seals slide off ice platforms in search of crabs and fish. Catch a glimpse of the large leopard seals which feed on fish, penguins, and other seals. Sharp teeth line their powerful jaws. Ross seals, more difficult to spot and less well known, eat fish, as do the smallest seals in the region, the fur seals. Seal hunters once coveted fur seals for their thick, high-quality coats. The huge elephant seals feed on squid around the Scotia Arc Islands and the Antarctica Peninsula. Males weigh nearly 4.5 tons and grow to lengths of up to 6 metres long. 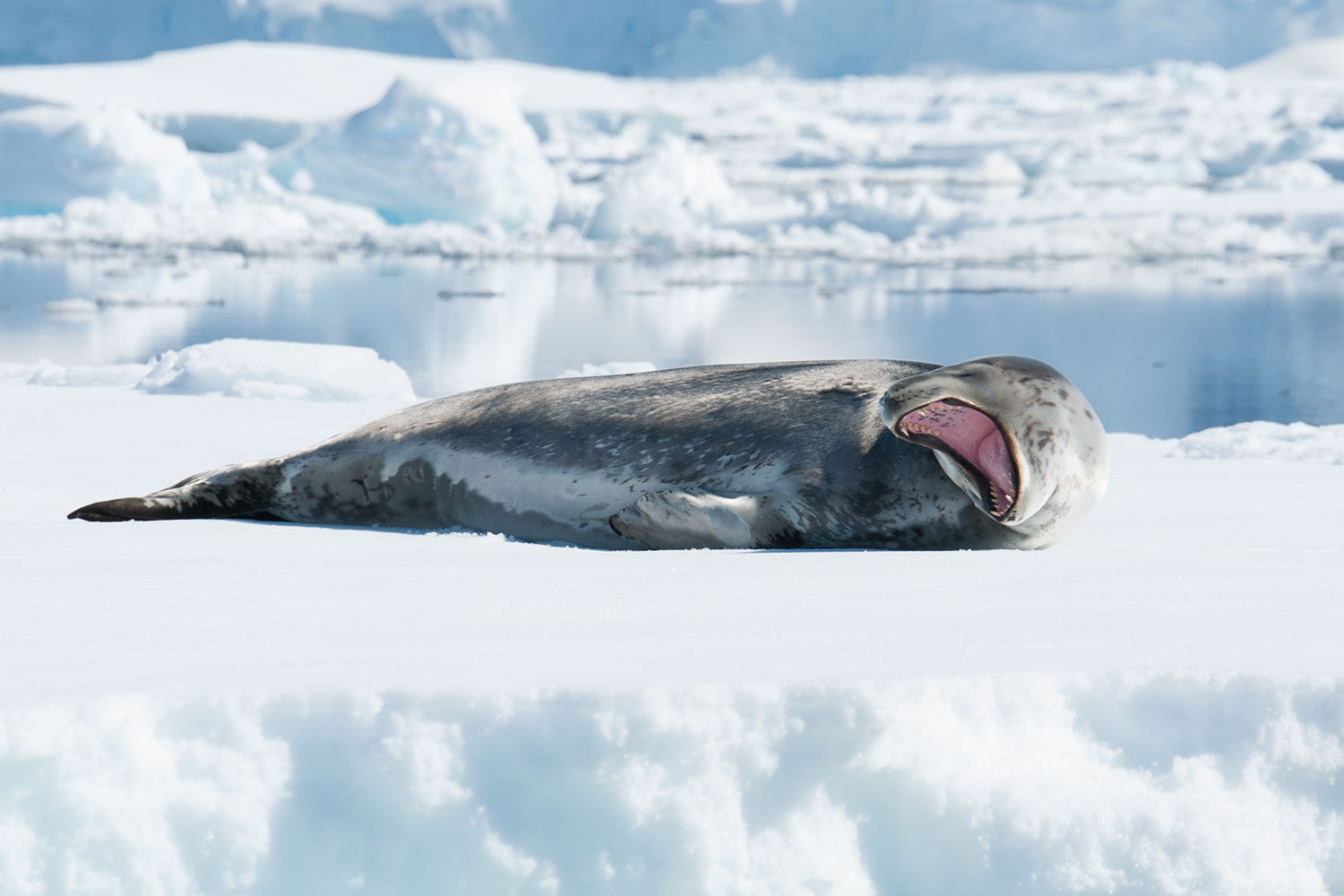 Forty-four species of seabirds, including albatrosses, circle the sky around the Antarctic and subantarctic. Fulmars, medium-to-large-sized petrels, scavenge dead birds and seals along the coast. Other petrels feed only at sea. Long, hook-tipped bills provide shearwater petrels with the means to pull squid from the water. Some species also pursue their prey beneath the water’s surface. Sheathbills, skuas, Arctic terns, cape pigeons, and petrels all live near the coasts and over the seas of Antarctica. 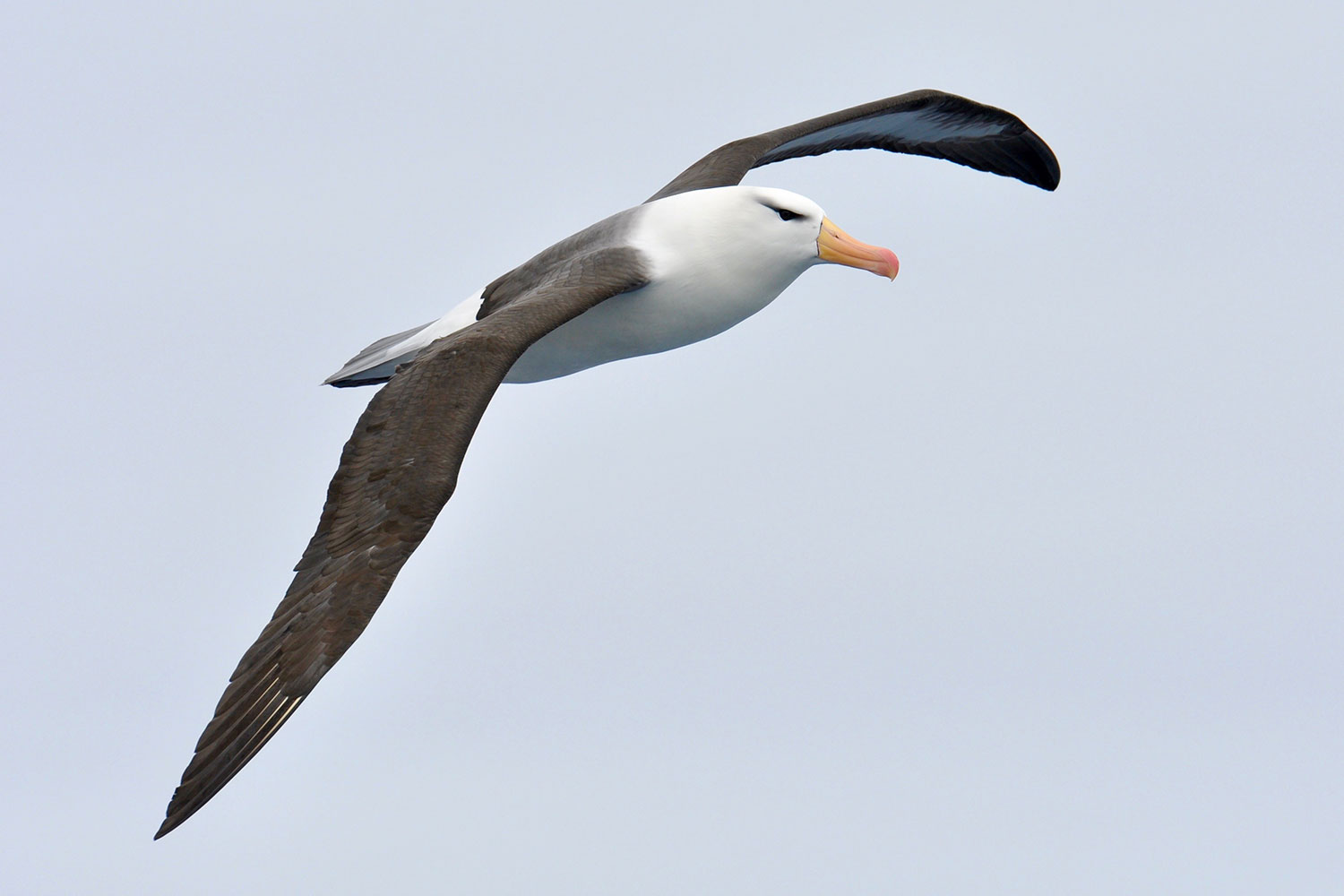 Guidance for Visitors to the Antarctic

This Guidance for Visitors to the Antarctic is intended to ensure that all visitors are aware of, and are therefore able to comply with, the Treaty and the Protocol. Visitors are, of course, bound by national laws and regulations applicable to activities in the Antarctic.

Taking or harmful interference with Antarctic wildlife is prohibited except in accordance with a permit issued by a national authority.

The most northerly and accessible region of Antarctica projects towards the tip of South America. The towering spires of the Peninsula and South Shetland Islands will take your breath away, as will the myriad icebergs, astonishing light, ice-choked waterways, noisy penguin colonies, graceful seabirds, or the sight of whales breaching through pristine waters.

One of the world’s greatest wildlife sanctuaries, South Georgia is rightly placed on the ‘must list’ of many expedition travellers. Accessed from South America or the Falklands, this spectacular and remote outpost is home to millions of penguins, seals and seabirds. Voyages are often part of a longer expedition including Antarctica – alternatively special journeys just featuring this amazing destination. With wild mountain and glacier scenery, unique and abundant colonies of wildlife and fascinating historic remains, South Georgia is an inspirational and never-to-be-forgotten place!

The Weddell Sea resonates with the ill-fated yet heroic expedition of the great British polar explorer Sir Ernest Shackleton. His ship, the Endurance was trapped in the ice here in 1915 and the story of the men's survival is one of the greatest in polar exploration. Tabular icebergs stream out of Antarctic Sound, the entrance to the Weddell Sea, where pack ice stretches to the horizon. Upwellings of cold, nutrient-rich water attract diverse wildlife and some islands host penguin colonies 200,000 strong. Noted highlights also include fossil-rich Seymour Island and Nordenskjold’s historic hut on Snow Hill Island.

East Antarctica is much more seldom-visited that the Antarctic Peninsula due to the much greater sea time required to reach there. Greater concentrations of sea ice make it inaccessible to all other than icebreakers or highly ice-strengthened vessels.  The spectacular Ross Sea region is the southern-most coastline in the world and is the most fascinating area from a historical perspective. Excellently preserved huts from heroic explorers such as Shackleton and Scott are some of the greatest highlights of a visit. Huge mountains dominate the coastline and large breeding colonies of Adelie and Emperor penguins make for incredible wildlife viewing opportunities. Along the way south and north you will also have the chance to visit the sub-Antarctic island paradises of Macquarie, Campbell and the Auckland Islands.