What are Expedition Cruises?

Small ship cruising to remote parts of the world beyond the reach of roads!

What are Expedition Cruises?

Small ship cruising to remote parts of the world beyond the reach of roads!

The experience on an expedition cruise is very different from that of a conventional, larger cruise ship. The focus is not about cruising or creature comforts but very much about about the destination, it’s nature and wildlife. Experience this not just from the water but also on land. Zodiac inflatable boats allow multiple daily landing possibilities in the remotest of places. This is a learning experience, with numerous in-depth lectures given by experts in many fields. Adventure options are often possible such as camping, snow-shoeing, kayaking. Don’t worry about sacrificing comfort though… all vessels feature excellent meals, great facilities and very comfortable cabins. We only features small ships meeting the highest standards and ice-class and which take fewer than 200 passengers. Be inspired and discover the sheer joy, unexpected sights and incredible beauty of the ends of the earth.

The advantages and joys of small-ship travel are many. Once you have discovered expedition cruising, you will be hooked! A small group is a must if you want to enjoy close encounters with the wild. You will have excellent opportunities to photograph, wildlife watch or just enjoy the wilderness. You will be in the company of like-minded travellers who enjoy exploration and have a genuine interest in wildlife and beautiful scenery. 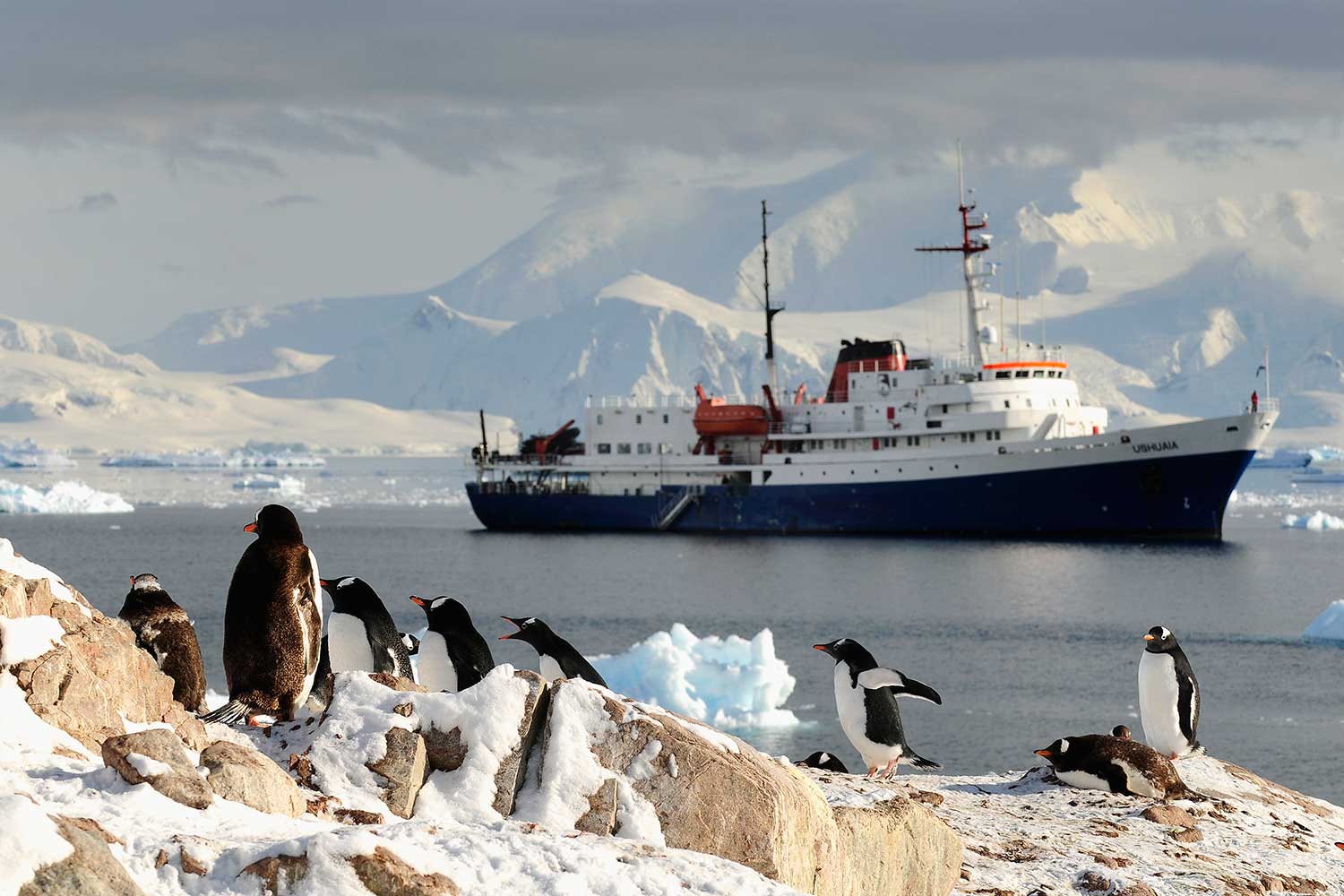 Venture to the remote untouched wilderness areas as early explorers once did: aboard a small ship, slipping in and out of sheltered inlets and hidden coves, peeking in on a family of playful sea otters and eagerly awaiting what's around the next bend. What makes expedition cruising unique is the emphasis on wildlife encounters, the natural environment, historical sites, research stations and informative talks and lectures. An expedition cruise on a small ship is perfect to explore off-the-beaten track waterways, narrow channels and tiny ports without overwhelming the local communities.

Knowledgeable and enthusiastic leaders are the key to any successful expedition. On these expeditions you will meet guides with solid polar experience and a genuine love for Antarctica and the Arctic …. learn about the wildlife, geography and history etc…

Equipped with professional guides and Zodiac landing craft, several landings are planned each day in the remotest wilderness areas. 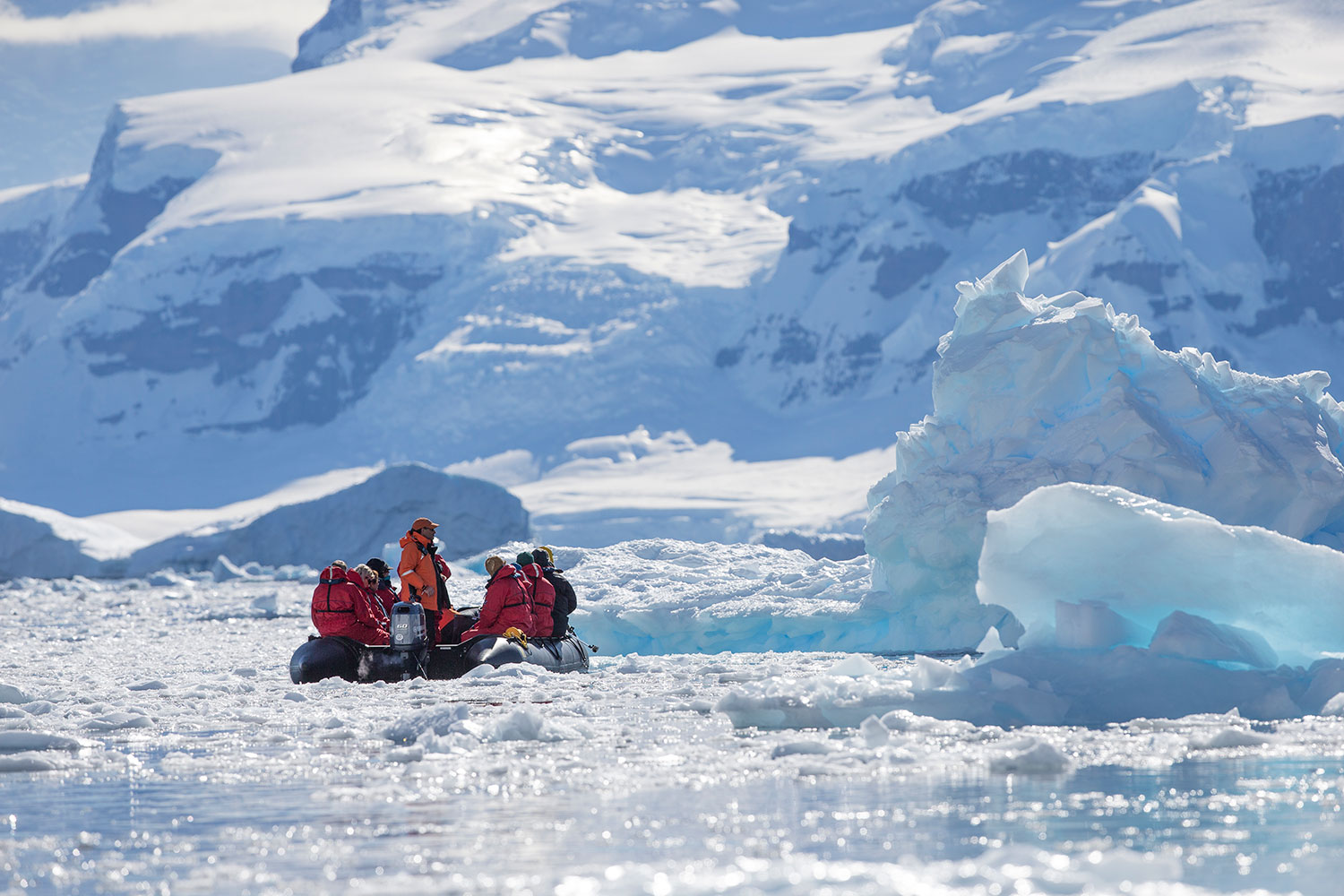 On select departures in the Arctic you can add sea-kayaking or camping to your adventure. In the Antarctic, there are four adventure options offered. In addition to sea-kayaking and camping, you could climb mountains or cross-country ski.

All itineraries are flexible, enabling the expedition team to make the most of favourable conditions or unexpected opportunities such as wildlife and iceberg sightings. Flexible itineraries allow time to watch for whales or feel the icy spray from the waterfall on your face. After all, glaciers do not "calve" on demand.  A small, maneuverable vessel and an unhurried pace are essential ingredients for those discriminating travellers who seek to really get in touch with their surroundings.

These voyages are to pristine wilderness areas and ecologically sensitive places, therefore it is critical to have minimal impact on the environment. When it comes to polar cruises, Expeditions Online exclusively represents vessel operators who are members of either IAATO(International Association of Antarctic Tour Operators) or AECO (Association of Arctic Expedition Cruise Operators), organisations which promote safe and sustainable tourism in the Polar Regions. An intrinsic part of membership is a safe and environmentally-responsible operation, compliance with all international maritime regulations including special rules for travel to Antarctica and the Arctic regions.

The Antarctic tourism industry is generally considered to have begun in the late 1950s when Chile and Argentina took more than 500 fare-paying passengers to the South Shetland Islands aboard a naval transportation ship. The concept of 'expedition cruising,' coupled with education as a major theme, began when Lars-Eric Lindblad led the first traveler's expedition to Antarctica in 1966. Lindblad once said, "You can't protect what you don't know." He believed that by providing a first-hand experience to tourists you would educate them to the ecological sensitivity of the Antarctic environment and promote a greater understanding of the earth's resources and the important role of Antarctica in the global environment.

The modern expedition cruise industry was born shortly thereafter in 1969 when Lindblad built the world's first expedition ship, the "Lindblad Explorer", specifically designed for carrying tourists to the Antarctic. Prior to this, human activity in Antarctica was limited to the early explorers, those seeking fortune in the exploitation of seals and whales, and more recently to scientific research and exploration. Antarctica's physical isolation, extreme climate and remarkable wilderness values are a great part of its attraction for tourism. From an industry he began in 1966, Lindblad's model of expedition cruising is still followed today by the majority of companies operating ship-borne tourism to Antarctica.

In recent years, these expeditions largely are conducted aboard some 40 vessels, each carrying from six to 500 passengers. The ships sail primarily to the Antarctic Peninsula region. Some itineraries also include South Georgia and the Falkland Islands. These voyages generally depart from Ushuaia (Argentina), Port Stanley (Falkland Islands) or to a lesser extent from Punta Arenas (Chile), Buenos Aires (Argentina) or Puerto Madryn (Argentina). Voyages to Antarctica also have included larger passenger vessels (carrying from 500 to 3,000 guests), which conduct "cruise-by" or sightseeing cruises only, without landing.