Expeditions Online Guide: Walruses and Where to See Them in the Arctic

Expeditions Online Guide: Walruses and Where to See Them in the Arctic

The Walrus (Odobenus rosmarus) is one of the most distinctive and enigmatic Arctic animals, full of contrasts.

They are one of the largest pinnipeds (semi-aquatic, fin-footed marine mammals), with adults weighing between 600kg to 2000kg.  However, despite their intimidating size and signature tusks, they are the gentle giants of the Arctic. Once hunted to the point of extinction, the population has recovered somewhat but is still classified as vulnerable, not the least because of declining sea ice levels in the Arctic Ocean. If you're interested in walruses and would love to see them in their native habitat, you should browse our range of Arctic cruises and expeditions. This blog has been written to celebrate one of the Arctic's most charming animals and to help readers interested in walruses choose the right trip for them. Or, if you're not planning a trip and are just interested in walruses, why not learn what you can from the experts?! Check out the rest of our polar expedition blog for more interesting articles and guides. 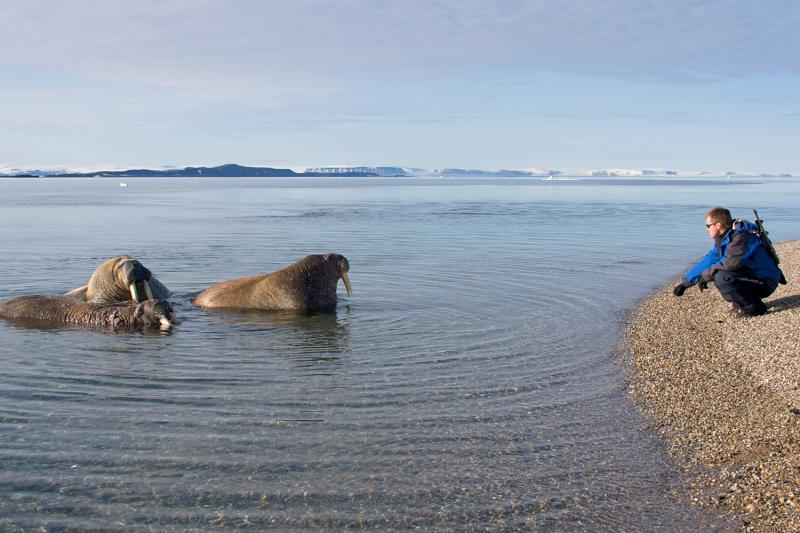 Some Basic Facts About Walruses

Walruses don’t move very fast on land, as you can observe when they haul their great mass along the ice. However, in the water it’s a completely different story.: walruses can easily swim four miles per hour on average and can accelerate in short bursts of up to 20 miles per hour. They are carnivores but they are not big hunters, instead choosing to feast on shellfish. They dive to reach their food, using their distinctive whiskers to identify where the food is.

Getting to see a walrus in its own habitat is a unique experience. They are strong and ancient creatures, and they have played a prominent role in the cultures of indigenous people. And it is perhaps a bonus that this fascinating creature happens to live in some of the most stunning parts of the world.

The smaller species of an Atlantic walrus can be seen in the spectacular Svalbard archipelago (browse our range of Svalbard Arctic cruises) as well as eastern and western Greenland (also check out our Greenland cruises). This is a majestic and prolific destination generally for Arctic wildlife and is the most accessible place for most people to see walruses. 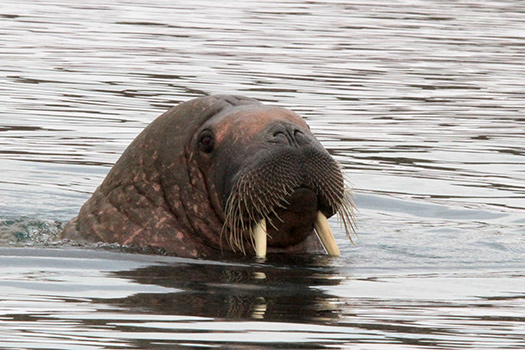 Cruises such as Around Spitsbergen and Exploration of Svalbard explore Spitsbergen and have excellent chances to see walruses both on sea ice floes as well as hauled out on beaches to warm up in the 24-hour summer sunshine. All you have to do is fly up from mainland Norway and let the ship take care of exploring the pristine Arctic wilderness.

The Three Arctic Islands tour takes in both Svalbard and eastern Greenland – both areas prime habitats for walruses. Other expeditions such as this Baffin Island Jewel of the Arctic cruise in northern Canada also offer excellent opportunities to spot walrus.

If you want to see the world’s biggest walruses, you need to head for the Pacific side of the Arctic: Alaska and especially the Russian Far East. The Across the Top of the World expedition will take you through the Bering Strait. The area here is a treasure trove of Arctic biodiversity. It is known for its Polar Bear community, unique birdlife, and also the largest populations of Pacific Walrus. Haulouts of these impressive animals can number in the thousands.

Expeditions Online specialises in cruises inspired by nature. Our range of Arctic cruises and expeditions offers a variety of trips to locations that are great places to see walruses on high-quality and environmentally-responsible small-ship cruises.

Read our blog to learn even more about the Arctic and keep an eye on our Arctic cruise deals page for new offers as and when they come up!  Discover how you can have your own Arctic adventure and see the wild walrus in all its glory. Visit the Arctic, inspire yourself, and see this beautiful, gentle giant in its own habitat. If you have any questions about this blog or the range of tours discussed, please don't hesitate to get in touch; we are always happy to hear from people interested in our cruises.

Below, you'll find some fantastic Arctic cruises where you can see walruses:

Like true Arctic adventurers, on this 13-day voyage with the Ocean Adventurer, we search for polar bears and other wildlife on outings and landings

Like a true Arctic explorer, you’ll discover breathtaking ice-draped coastlines that are rarely visited by even the most intrepid adventurers

Flights from Iceland or Copenhagen included

Onboard this MV Ocean Atlantic Greenland cruise alongside glacial landscapes, whales, seabirds and a multitude of fascinating settlements

Voyaging to two of the most isolated, icy archipelagoes in the Russian High Arctic on board the luxury Ocean Adventurer

Under The Northern Lights: Ocean Adventurer

Unique 14 day expedition cruise to the east Greenlandic wilderness with its majestic fjords, glaciers and wildlife

On top of the world - The North Pole