BBC Science News reports that the earliest ever satellite maps of Arctic and Antarctic sea-ice have been assembled by scientists. They were compiled with data from Nasa's Nimbus-1 spacecraft, launched in 1964.

BBC Science News reports that the earliest ever satellite maps of Arctic and Antarctic sea-ice have been assembled by scientists. They were compiled with data from Nasa's Nimbus-1 spacecraft, launched in 1964. Regular mapping from space did not begin until 1978. The satellite's old film images have now been re-analysed to determine the extent of the marine ice at the poles in the September of that year. 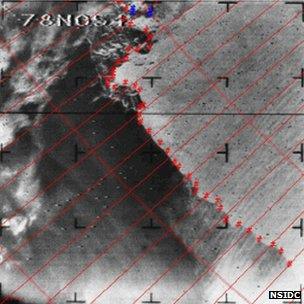 One key finding is that sea ice around the Antarctica in the 1960s was probably just as extensive as it is today.

The Nimbus-1 satellite was a short-lived mission that pioneered instrumentation for weather satellites. It observed the Earth's clouds in black and white video, which it transmitted to the ground as an analogue TV signal. Those transmissions were then photographed on to 35mm film and archived. The canisters containing the original film had to be pulled out of storage to perform the re-analysis.

September is when Arctic sea-ice cover reaches its minimum area and when the Antarctic floes achieve their greatest reach. Scientists on the project caution that the data represents just three weeks in one year but nonetheless underscores some interesting observations. 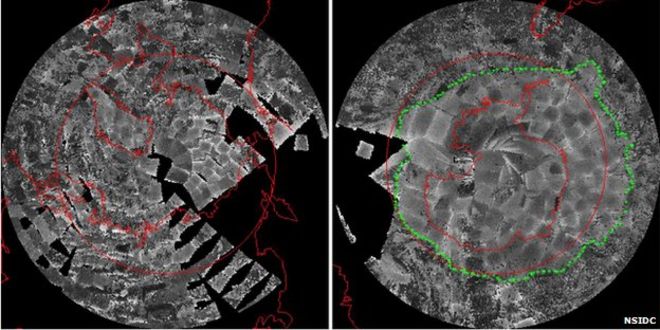 It gives scientists something to ponder as they try to explain the recent year-on-year growth in winter ice cover recorded in the Antarctic. Since 1979 small increasing trends have occured in the Antarctic with a lot of variation from year to year. Scientists want to know if have we been seeing a real shift or something more cyclical. This new information gives some indication that the increase occurring now may actually be within the bounds of natural variability. 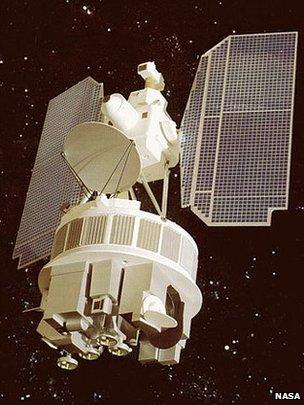 The analysis also produced a summer Arctic sea-ice minimum extent of 6.9 million sq km - broadly similar to the 1979-2000 average of 7.04 million sq km observed by modern satellites, and the number used to judge current behaviour in the Arctic.

Recent years have witnessed a dramatic decline in Arctic sea ice, with the 2012 coverage setting a "record" for the modern era at 3.41 million sq km.