In a world-first event for international Ice Swimming and Antarctica tourism, 14 swimmers have successfully braved zero-degree Antarctic waters in nothing more than speedos and completed an amazing 1km swim.

In a world-first for international Ice Swimming and Antarctica tourism, 14 swimmers have successfully braved zero degree Antarctic waters in nothing more than speedos to complete a truly amazing 1km swim! During an Antarctica cruise on board the RCGS Resolute between 16 and 28 November 2018, the highly experienced Ice Swimmers from nine countries did not merely take a 'polar plunge', but swam 1000 metres over a marked course, carefully watched on by expedition staff, doctors and enthusiastic passengers from the ship. 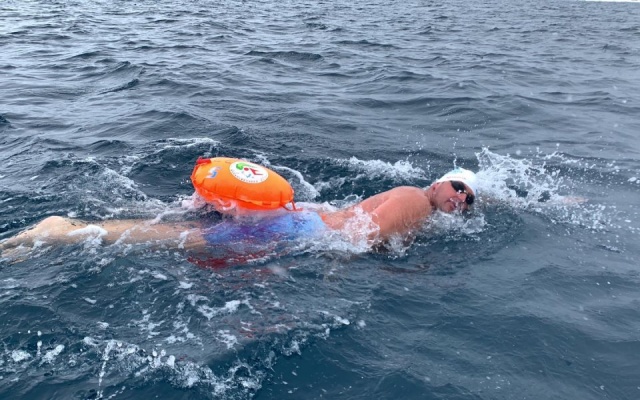 Bulgarian swimmer Petar Stoychev recorded the fastest time for this event, a first-ever in the history of swimming in the icy waters of Antarctica. The competition was held near Trinity Island in the Bay of Mikkelson Harbour, Antarctic Peninsula. The swim was 1000 meters at an air temperature of about -2 degrees and a water temperature of -0.8 degrees. Stoychev swam a time of 11 minutes and 8 seconds. Eventually, he even decided to make a show for the people watching the race from the ship by swimping the final meters with a butterfly.

"I am very happy with myself, and there has been a slight tension in the last days because of the constant postponement of the start, but now it is all in history and a Bulgarian is the champion in the first swimming of Antarctica ," Stoychev said.

Argentina's Victoria Mori finished in second place in 12:09 minutes. Third and a half minute behind was Diego Lopez from Spain.

"I did not think of anything but winning and picking up the pace from the beginning, and I did not want to risk putting things right at the last minute, so I told myself that I had to be strong and fast from the first second. When I saw that I was ahead with a difference, I decided to finish the last meters with a butterfly for the joy of the people on the ship" Stoychev said.

"Before I went into the water, my body temperature was 37.3 degrees, and when I stepped on the boat I immediately measured it and it was 30.8 My pulse before the start was 92 beats per minute, and after the euphoria of the victory I forgot to measure it but I quickly recovered and now I feel wonderful, this is one of the biggest victories in my entire career" added the 42-year-old Bulgarian.

The Antarctica ICE Swimming event was organised by Ram Barkai of the International Ice Swimming Association and Stewart Campbell of Expeditions Online and facilitated by One Ocean Expeditions on their new ship Resolute. There is a new expedition planned for November 2019 on the ship Akademik Ioffe. This exceptional 12 day Antarctic voyage will explore remote coastlines in the Antarctic, with a goal undertake extraordinary outdoor pursuits including the 1km Antarctica Ice Swimming event. The expedition is equally open for swim participants as well as friends or supporters. Other adventure options include camping, sea kayaking, ski touring, snowshoeing as well all regular landings by Zodiac.

Following are some other Antarctic trips with exciting adventure options:

Discover the great sea route at the top of the world—on the game-changing new expedition ship Ultramarine. Reach the High Arctic in just over a week!

Northwest Passage to Ellesmere and Axel Heiberg Is

This expedition on Magellan Explorer takes you to pearls of the South Atlantic: the wildlife extravaganza of South Georgia, and the Falklands