Humpback Whales and Where to See Them

Humpback Whales and Where to See Them

Wildlife watching is one of life’s most satisfying activities, and whale watching is one of the most rewarding of all. They are impressive, majestic and intelligent creatures, frequenting some of the world’s most beautiful places, which is an added bonus for the keen traveller and photographer!

Humpback whales are enormous mammals, measuring around 40-60 feet in length and weighing approximately 35-40 tonnes. Despite their great size, however, they are very acrobatic and easily identifiable due to their penchant for breaching the water and landing with an enormous splash, ‘waving’ their huge tail fins as they re-enter the water. It’s unclear if they do this to clean themselves or simply for fun. Either way, it’s an incredible sight to behold!

The plaintive whale songs of the humpback, for which they are well known, are haunting and magical, with their complex sequence of melodies traveling for miles upon miles through the ocean. Although we have much to learn about the meaning of these songs, scientists believe they are connected to mating rituals and the way in which the whales communicate with one another.

The humpback whale is a baleen whale. They are black on the dorsal (upper) side, with mottled black and white coloring on the ventral (under) side. They have teeth like little bristles and have to swallow their food whole, so they tend to favor smaller prey, such as plankton, shrimp-like krill, mackerel, and salmon. This diet is one of the factors that dictate where you will find the humpback whale. 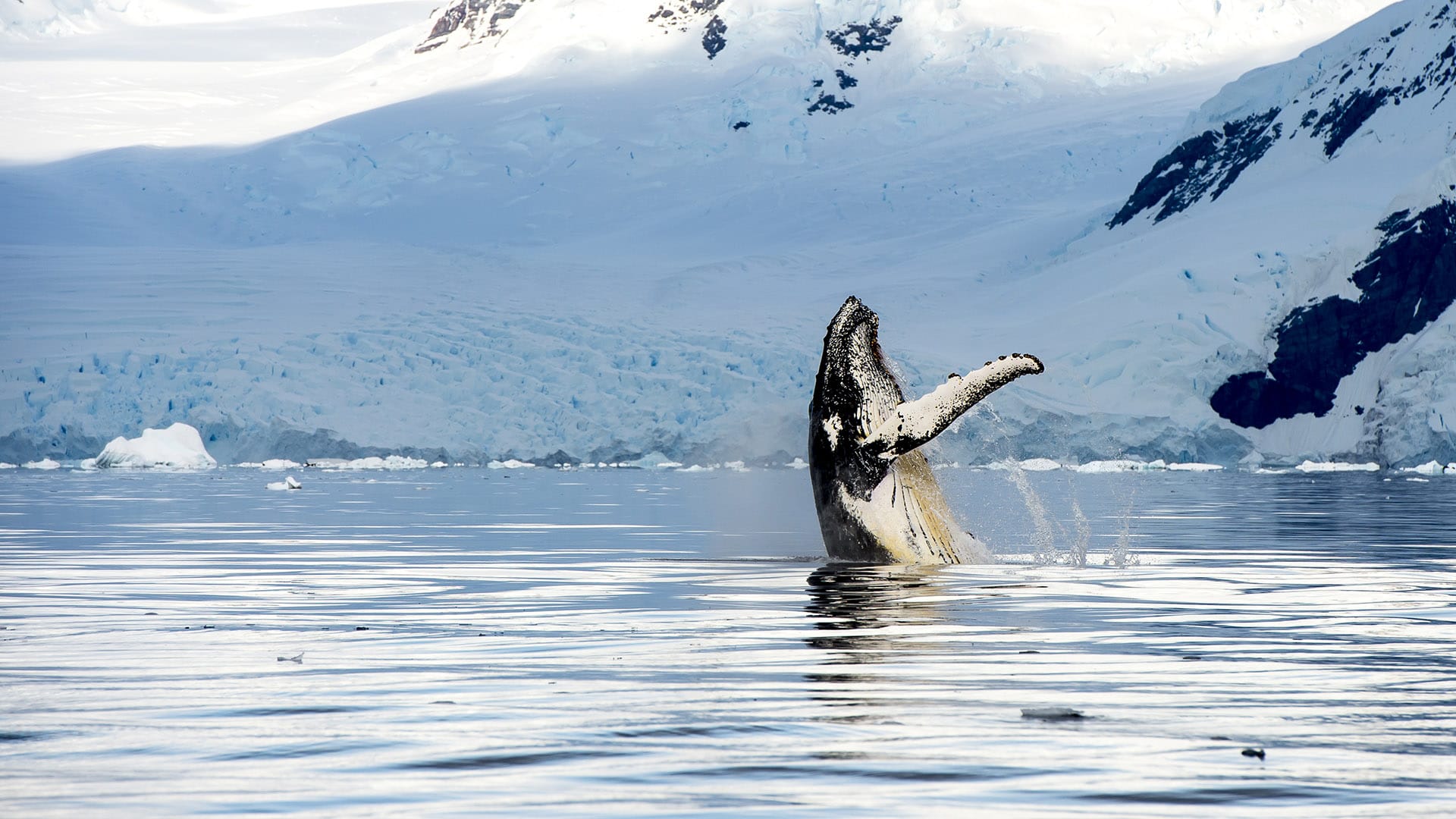 Humpback whales can be found all over the world, but their location at any given time depends on the season. They will spend a lot of the year close to islands or mainland shores, but they will also migrate huge distances across oceans. During the summer, they can be found in high-latitude areas, such as the Gulf of Maine or Gulf of Alaska. In the winter months, they migrate to warmer waters toward the Equator, such as South America, Hawaii and Africa.

The western and northern coasts of Scotland have the potential for spotting some humpbacks as they migrate north from southern waters. Specifically, they favor waters around the Hebrides—particularly the Island of Mull and further north around Shetland. The Sea Watch Foundation has also reported humpback whale sightings over the last two years on the east coast of Scotland, around Aberdeenshire. May to August is the best time for spotting an occasional humpback around Scottish waters. 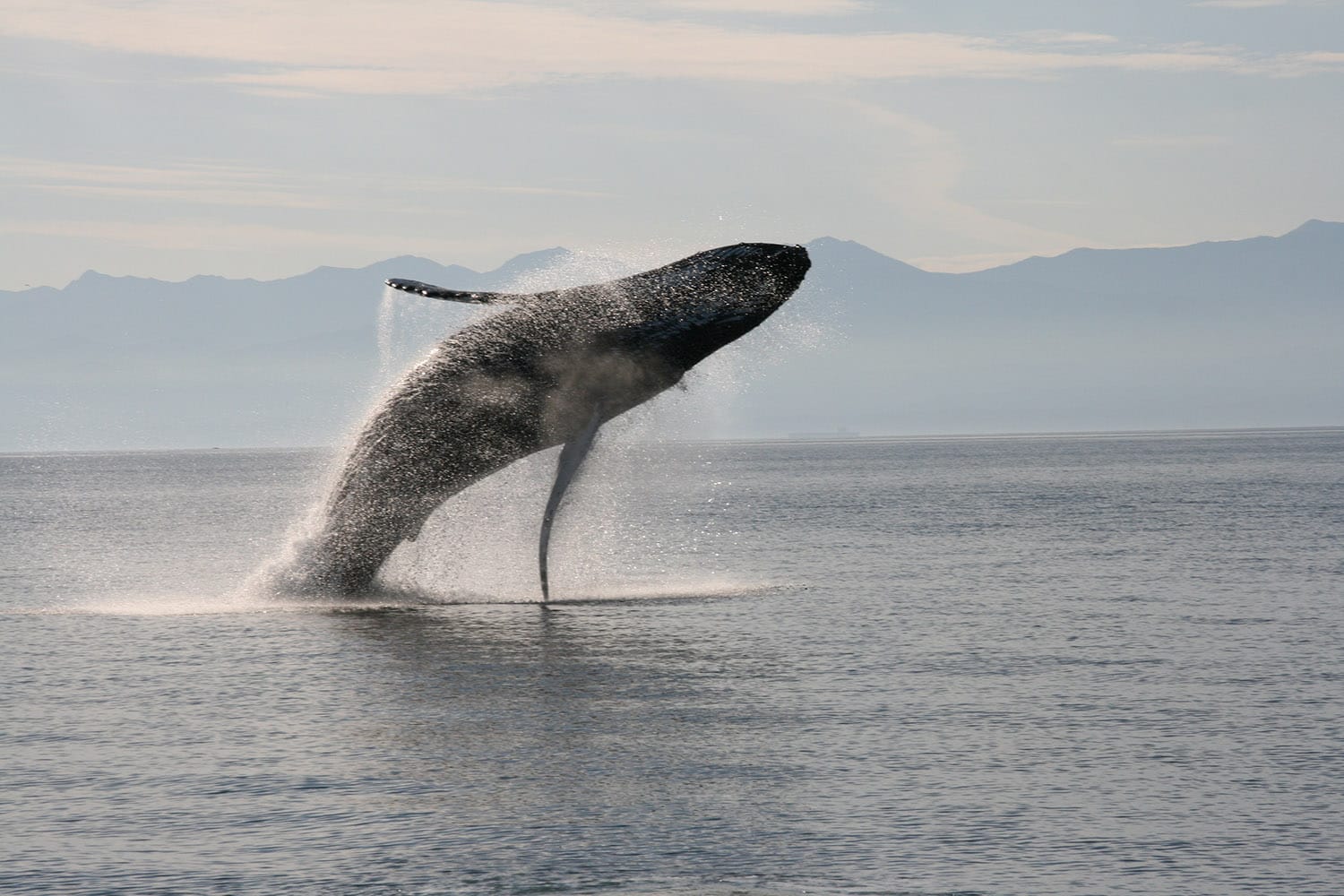 The tail of a humpback whale seen as it dives into the deep!

Humpback whales, along with minke whales, orcas, and even blue whales, can be spotted off the coast of Iceland, usually between May and September. The combination of the cold Arctic waters in the north and the warmer north Atlantic ocean to the south, combined with the long summer daylight hours and relatively shallow waters, makes Iceland a favorable feeding ground for humpbacks and many other whale species.

During the northern hemisphere’s summer months, humpback whales enjoy the cooler waters around Alaska. Whilst there, they work together to gather food, blowing bubbles to create nets and confuse their prey. They then open their jaws wide and spin through these bubble-nets to eat their food. It’s incredibly clever and allows them to eat up to one and a half tonnes of food each and every day. During the winter, they survive off body fat reserves built up during the summer.

The water around New Zealand’s south island is also known for hosting humpback whales around June and July. During this time, they undertake their seasonal long-distance migration to winter breeding and calving grounds in warmer waters. Two currents collide around the Kaikoura Coastline, creating a rich abundance of fish, which humpbacks, blue whales, and sperm whales absolutely love.

Maybe you'll get to see a mother and calf together!

Humpback Whales are renowned for spending time around California’s idyllic Monterey Bay for seasonal feeding from April through November. This is due to the area’s abundant food source. The ocean trench, called the Monterey Submarine Canyon, allows these curious creatures to get quite close to the shoreline and engage in a little “people watching”! They pass Monterey Bay as they travel south to north and back again at various times of the year.

Spotting Humpback Whales in the wild

Visit us at expeditionsonline.com to find out how you can combine a whale-watching experience with a trip to the Antarctic. It’s here that you can see humpbacks in the most amazing and pristine setting—whilst also getting the chance to view minke whales, orcas, and dolphins.

Our travel advice on Antarctic expeditions is independent and expert. Please do get in touch with us today for more information on our range of trips that include whale and wildlife watching opportunities in the Antarctic.

Have a look at one of our humpback encounters below!