The sailing expeditions in Spitsbergen will be carried out by the three-mast sailing vessel Rembrandt van Rijn. This beautiful vessel will bring you to the remotest places around Spitsbergen. Sailing northwards we visit Magdalenafjord, one of the most beautiful places on Spitsbergen, with many impressive glacier faces. During a shore visit we will view the remains of 17th century English whaling activities. We can also visit some big seabird colonies particularly noteworthy for their Little Auk

A rare and amazing chance to explore Spitsbergen by sail, amongst spectacular waterways and towering landscapes and at the height of summer. Sail on a historic schooner and sense the thrill of a real Arctic adventure.

Experience the Arctic Summer with this incredible sailing expedition adventure!

The sailing expeditions in Spitsbergen will be carried out by the three-mast sailing vessel Rembrandt van Rijn. This beautiful vessel will bring you to the remotest places around Spitsbergen. Sailing northwards we visit Magdalenafjord, one of the most beautiful places on Spitsbergen, with many impressive glacier faces. During a shore visit we will view the remains of 17th century English whaling activities. We can also visit some big seabird colonies particularly noteworthy for their Little Auk.
PLEASE NOTE: All itineraries are for guidance only. Programs may vary depending on local ice, weather, and wildlife conditions. Flexibility is paramount for expedition cruises. Willingness to compromise on comfort is a basic requirement on board a historic sailing vessel. Important information about the sailing program: The boat is equipped with sails to be used in good conditions (based on open sea, water depth, wind, and time). This is not guaranteed. The captain decides whether to use the sails or the engine. There is no claim to one or the other propulsion method. If sails are used, the crew operates them. Guests follow the safety instructions of the team. Average cruising speed for s/v Rembrandt van Rijn is 6.5 knots. Day 1: Largest town, biggest island You touch down in Longyearbyen, the administrative center of Spitsbergen, the largest island of the Svalbard archipelago. Enjoy strolling around this former mining town, whose parish church and Svalbard Museum make for fascinating attractions. Though the countryside appears stark, more than a hundred species of plant have been recorded in it. In the early evening the ship sails out of Isfjorden, where you might spot the first minke whale of your voyage. In the evening you sail for Trygghamna, where you see the remains of a 17th-century English whaling station and 18th-century Pomor hunting station, both of which you can visit the next morning. Day 2: Foxes, seabirds, and grazing reindeer From Trygghamna you walk to Alkhornet, a large seabird cliff where the birds are scouting out breeding places. Below the cliffs is a common place to spot Arctic foxes, and you may also see reindeer grazing on the lush vegetation if there’s not too much snow. Day 3: Remains of the whalers You sail into Fuglefjorden amid views of Svitjodbreen and Birgerbukta, both breeding areas for great skuas as well as likely spots to see a polar bear. On Birgerbukta you can see 17th-century Basque ovens once used for cooking whale blubber. The aim next is to visit Ytre Norskøya, a small island that served for many years as a Dutch whaling lookout. Here you can still follow the whalers’ tracks to the summit of the island, passing popular bird cliffs on the way. On shore are the remains of more 17th-century blubber ovens, while Arctic skuas and common eiders breed among the graves of some two hundred Dutch whalers. Day 4: Glaciers and Ermaktangen geology Raudfjorden, on the north coast of Spitsbergen, is a fine place for gazing over the glaciers. It’s also a favorite hangout for ringed and bearded seals, colonies of seabird, and the occasional polar bear and beluga whale. Ermaktangen, at the fjordh coast of Spitsbergen, is a fine place for gazing over the glof the land. Day 5: Wide open tundra If ice conditions permit, you may land on the northern side of Reindyrsflya, the largest tundra area of Spitsbergen. This vast and rolling plain is a popular grazing area for reindeer, and several species of waders also breed here. Similarly, the lakes afford you a good chance of spotting red-throated divers and king eiders. Day 6: The massive Monaco Glacier Depending on the weather, you could sail into Liefdefjorden and cruise within sight of the 5-kilometer-long (3.1 miles) face of the precipitous Monaco Glacier. The waters in front of this glacier are a favorite feeding spot for thousands of kittiwakes, and the base of the ice is a popular polar bear hunting ground. If ice conditions prevent sailing here early in the season, an alternate route along the west coast of Spitsbergen can be implemented. Day 7: On to the little auks In the morning you land at Fuglesangen, where you can observe spirited communities of little auks. You then sail south to Magdalenafjorden, one of the glacier-filled highlights of Spitsbergen. A shore visit shows you the remains of 17th-century English whaling, and you can also see more large colonies of little auks. Day 8: Earth’s northernmost community You head north for Kongsfjorden and Krossfjorden. The landscape is likely to show signs of winter, the crags and slopes still blanketed with snow. Here there are rich opportunities for snowshoeing – we provide the snowshoes – and visiting places of historic interest: Ny London, where you can see the remains of early 20th-century marble mining, and Ny Ålesund, the northernmost community in the world. There are also research stations and the famous anchor mast of the dirigible Norge, which took the first flight across the North Pole to Nome, Alaska in 1926. Krossfjorden offers views of colossal glaciers and lofty mountain peaks, but ultimately the extent of fjord ice dictates the itinerary here. Day 9: The past days of polar bear hunting On your journey south, the goal is a landing at Fuglehuken. Here you see remains from the great era of polar bear hunting. There are also large seabird colonies and a haul-out spot for harbour seals. Alternatively you could land on the coast of Forlandsundet, at Engelskbukta or Sarstangen. Walruses are occasionally seen here, and the tundra is a fine place for a walk. Day 10: Wide tundra, towering mountains The next stop is Bohemanflya, an expansive tundra with its own avifauna (depending on when spring arrives) and spectacular geological formations along the coast. In Gipsvika you can go on shore near Templet, a mountainous location of eroded sedimentary rock from the Upper Carboniferous period – around 290 million years ago. Day 11: There and back again Every adventure, no matter how grand, must eventually come to an end. You disembark in Longyearbyen, taking home memories that will accompany you wherever your next adventure lies. 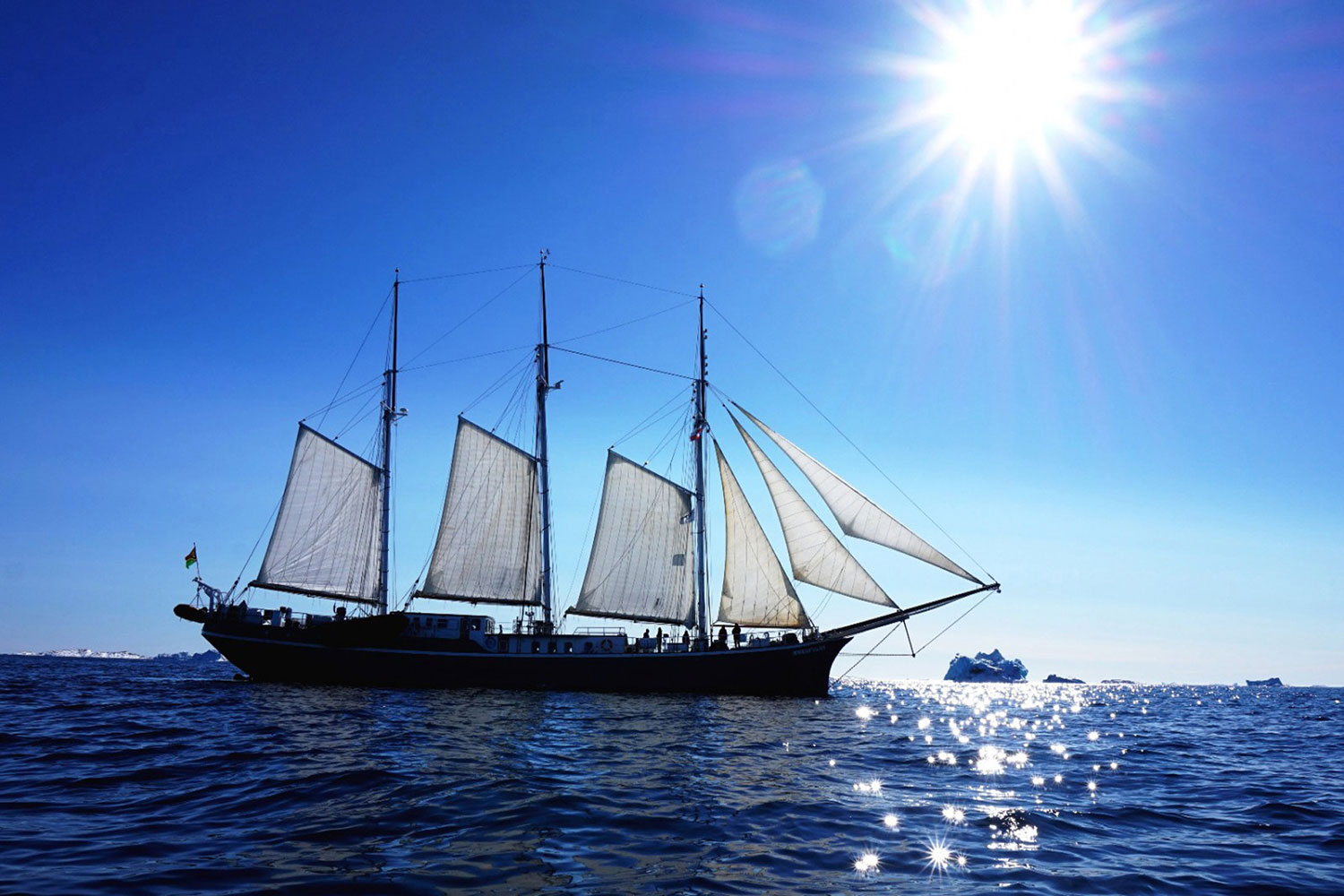 ‘Rembrandt Van Rijn’ was built as a herring lugger early last century. The vessel was rebuilt as a three-mast passenger sailing schooner in he Netherlands in 1994 and sailed in Spitsbergen (1994 – 1996) and in Galápagos (1998 - 2001). The vessel underwent a complete rebuilding and refurbishment program until 2011. The communication and navigation equipment has been completely renewed according to the latest SOLAS regulations. 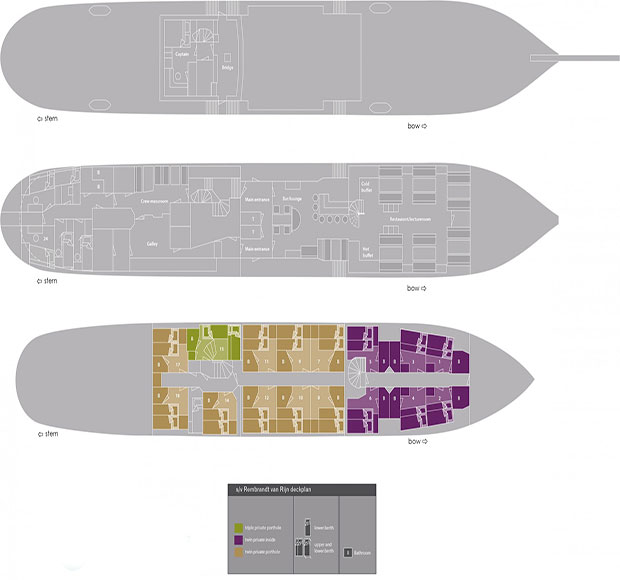