This cruise pushes beyond the limits of typical tours and beyond the boundaries of human settlement. Over four nights venture into the dense forests and small tributaries within the UNESCO Natural World Heritage Site, The Central Amazon Conservation Complex. With our small group of adventurers, very experienced naturalist guides, and our deeply capable exploration crew, we venture into one of the richest areas of the planet. We also visit isolated villages to see what life is like living on the edge of the greatest wilderness on Earth

Show Dates & Prices Enquire
Departing from Manaus, Brasil, this is a true expedition cruise that explores far into the remote wilderness rainforest. The Motor Yacht Tucano voyages far up the least inhabited major river in the Amazon Basin: The Rio Negro. This cruise is the only one that ventures deep into the UNESCO Natural World Heritage site, the Central Amazon Conservation Complex, the largest reserve in the entire Amazon. By day and by night, through many active excursions, we seek out the mysterious life that stirs in the heart of the rainforest. On the last day of the cruise we visit the Encontro das Aguas, the confluence of the world’s two largest rivers, the Rio Negro and the mighty, magnificent, Amazon River itself. The onboard guides are skilled naturalists who, over  many years have developed fantastic skills that enable us to observe creatures almost never seen by others. In addition to observing flora and fauna, we also visit small villages to learn of the culture of pioneer families. Because of the exploratory vessel course, the very small groups, the many activities, and the skilled guides, this cruise is the most authentic cruise in the entire Amazon.

Without doubt the best way to explore the Amazon. The Tucano is a delightful way to travel. 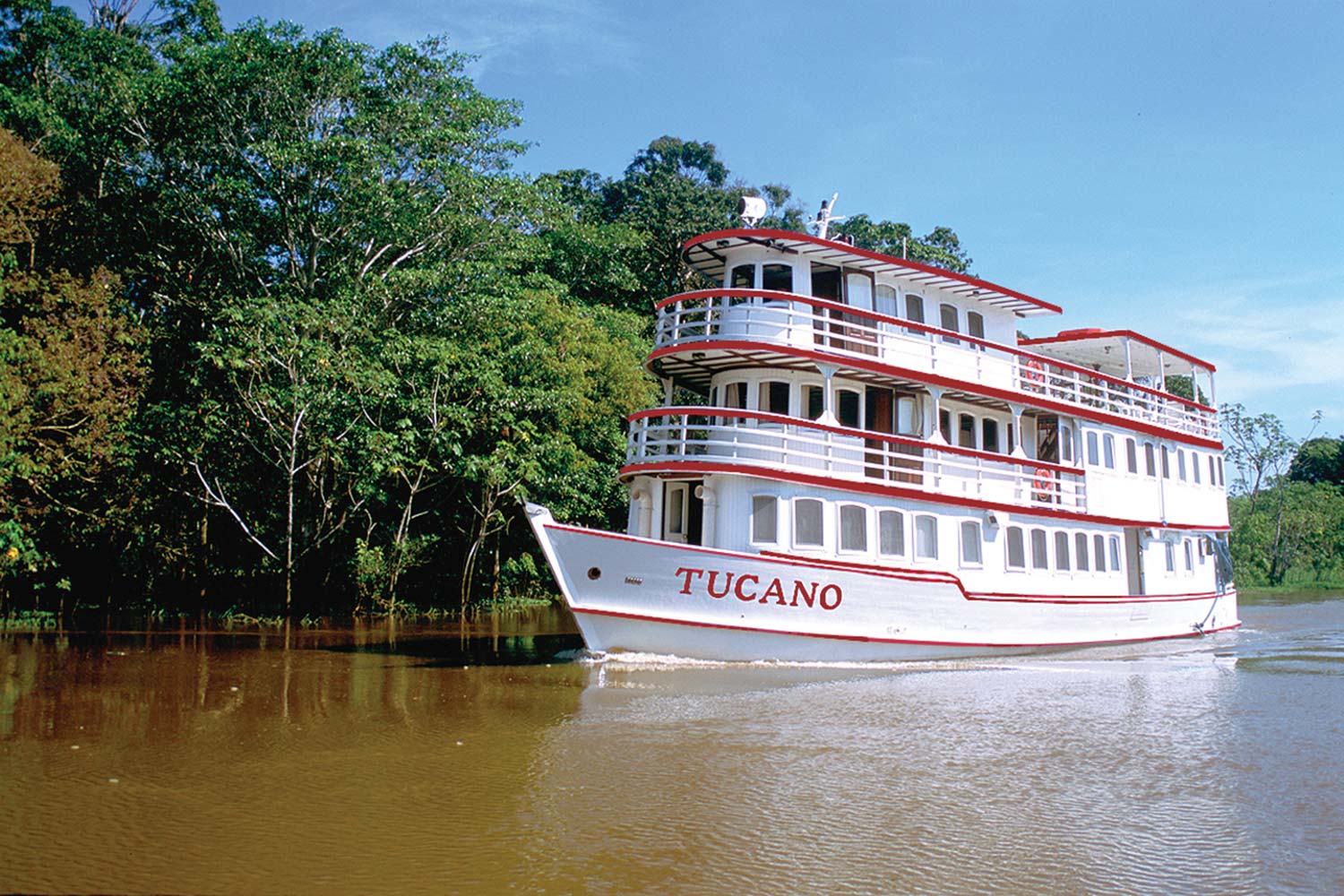 Specifically designed for deep forest exploration, the M/Y Tucano has a shallow draft, a fleet of exploration craft, charming and exquisite wooden interiors and comfortable accommodations for a maximum of 18 passengers. The highly experienced captain and staff take you to some of the remote tributaries that are literally uncharted waters. They have a passion for exploration and hunt deep into the small, heavily-forested tributaries where the Amazon's most interesting creatures still thrive .... as they have for millions of years. Experience magnificent flora and fauna that is almost always invisible to travellers on more typical cruises. We almost never see any other people or other boats. This is what makes our cruises spectacular experiences that few people ever will be able share... in their entire lives. The M/Y Tucano takes you further and deeper than all other cruises! 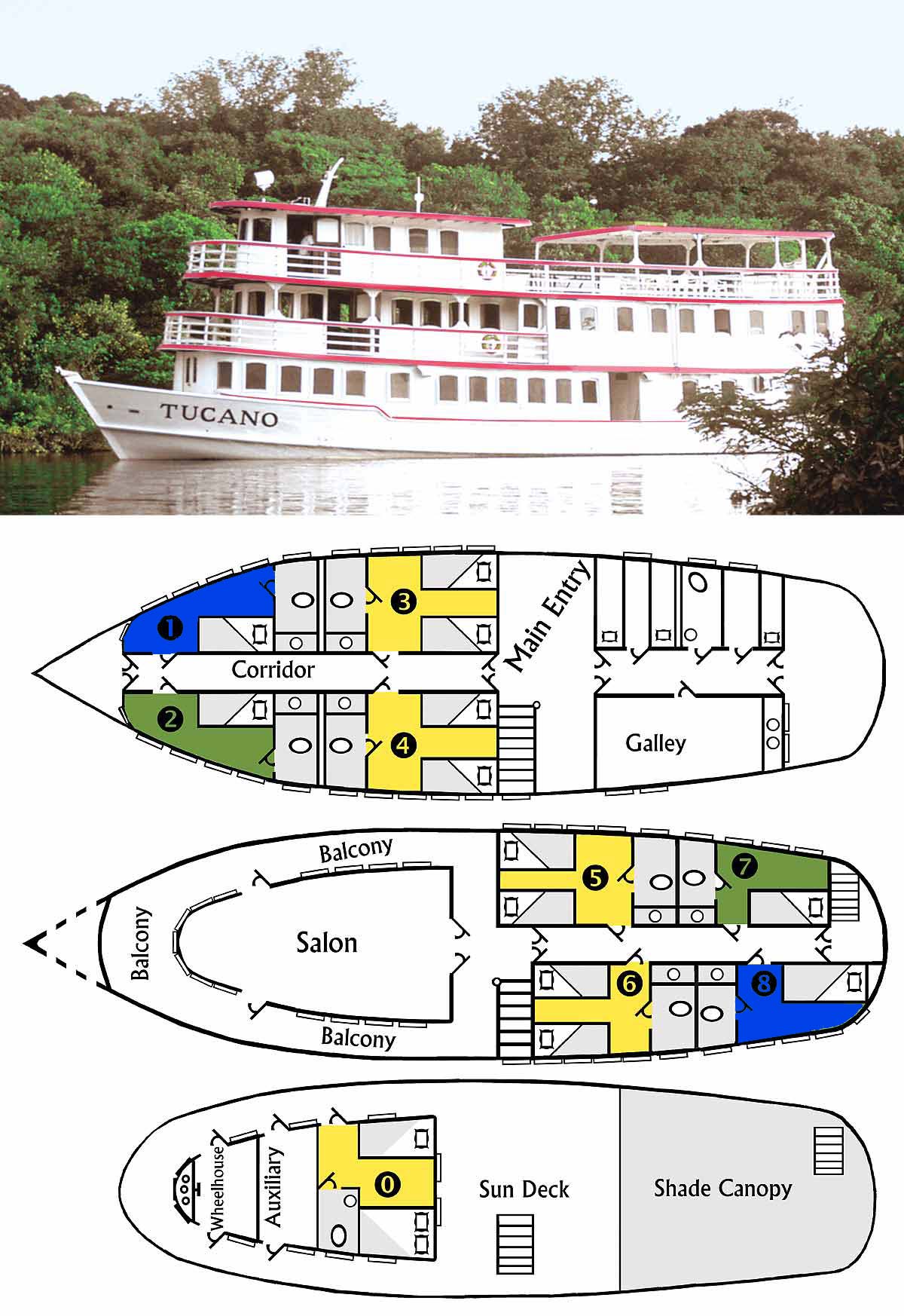 Included
Excluded
Deposits Reservations require a non-refundable deposit of US$500 per person at the time you receive a booking confirmation from Expeditions Online. A payment link will be sent to you and this may be paid by major credit card or bank transfer. Final Payments Balances are due 60 days prior to departure. Stateroom Categories There are three stateroom categories on the Motor Yacht Tucano: all have a private bathroom and air-conditioning. Yellow Staterooms: these five double staterooms are the largest on the vessel. They have beds side by side. Green Staterooms: these two double staterooms have above and below berths (bunk beds). Blue Staterooms: these two single staterooms have a single twin sized bed. On request, Blue can be converted to Green. Triple Occupancy: Three travelers can share stateroom “0”. Each traveler pays the Green Category Rate. Single Occupancy: If a single traveler is willing to share with another same gender passenger, he or she will be charged the Green Category rate, even if a roommate is not available. Single travelers that request a private stateroom are charged the Blue Category rate. If a single traveler wishes to reserve a Yellow Category stateroom, the fare for two travelers at the Yellow Category rate is due. Discounts for Children Children 12 years of age and under who share a room with an adult receive a discount of 50% off the cruise rate for whichever stateroom category they select, subject to availability. Cancellations All requests for cancellation must be received in writing to Expeditions Online. Cancellations received 60 days or more prior to departure means the loss of deposit. For cancellations received between 60 and 45 days before departure, the cancellation fee is 50% of the cruise cost - within 45 days of departure all payments are forfeited. We strongly recommend that you obtain adequate trip cancellation insurance. Booking Terms Please read carefully the Terms and Conditions for Expeditions Online (link at the bottom of this page). This expedition is operated by Amazon Nature Tours and you additionally travel under their terms and conditions as the operator. Details will be forwarded to you at the time of booking. Notes Rates are subject to change without notice. In case of force majeure to include unexpected repairs, Amazon Nature Tours reserves the right to substitute a vessel similar to the Motor Yacht Tucano without penalty.