Winding your way through the icy channels of the legendary Northwest Passage is history brought to life. On this compelling 17-day journey aboard our game-changing new vessel Ultramarine, passengers retrace the steps of the intrepid Franklin Expedition, which left the shores of England in 1845 in search of the last unexplored section of the Northwest Passage—only to become permanently icebound. Its discovery more than a century and a half later was a much-celebrated moment in polar history

Booking Request Enquire
On Ultramarine, guests benefit from two twin-engine helicopters that will provide spectacular aerial views of the Arctic landscape, the most extensive portfolio of adventure options in the industry, more outdoor wildlife viewing spaces than any other expedition ship its size, and 20 quick-launching Zodiacs to get you closer to ancient glaciers, dramatic fjords and towering icebergs. Explore colorful Greenlandic villages, and shop for traditional Inuit handicrafts. Hike the endless Arctic backdrop and marvel at the vast, colorful tundra. Keep your eyes peeled for the elusive and majestic creatures that make their home in this wilderness, such as whales, walrus, muskoxen and polar bears. Come aboard Ultramarine, follow in the footsteps of Franklin’s legendary Arctic voyage, and return home with memories to last a lifetime.

For those inspired by Arctic explorers!

Ultramarine, is designed to go beyond the familiar in polar exploration, to discover new places, and to immerse you in the best the region has to offer. Equipped with two twin-engine helicopters, Ultramarine offers the most robust portfolio of adventure activities in the industry, the most spacious suites in its category, breathtaking public spaces, and more outdoor wildlife viewing spaces than other expedition ships its size. It also features an innovative mix of sustainability features that exceed all industry standards. With all this and more, Ultramarine is set to deliver the ultimate polar expedition experience - voyages start in 2021! 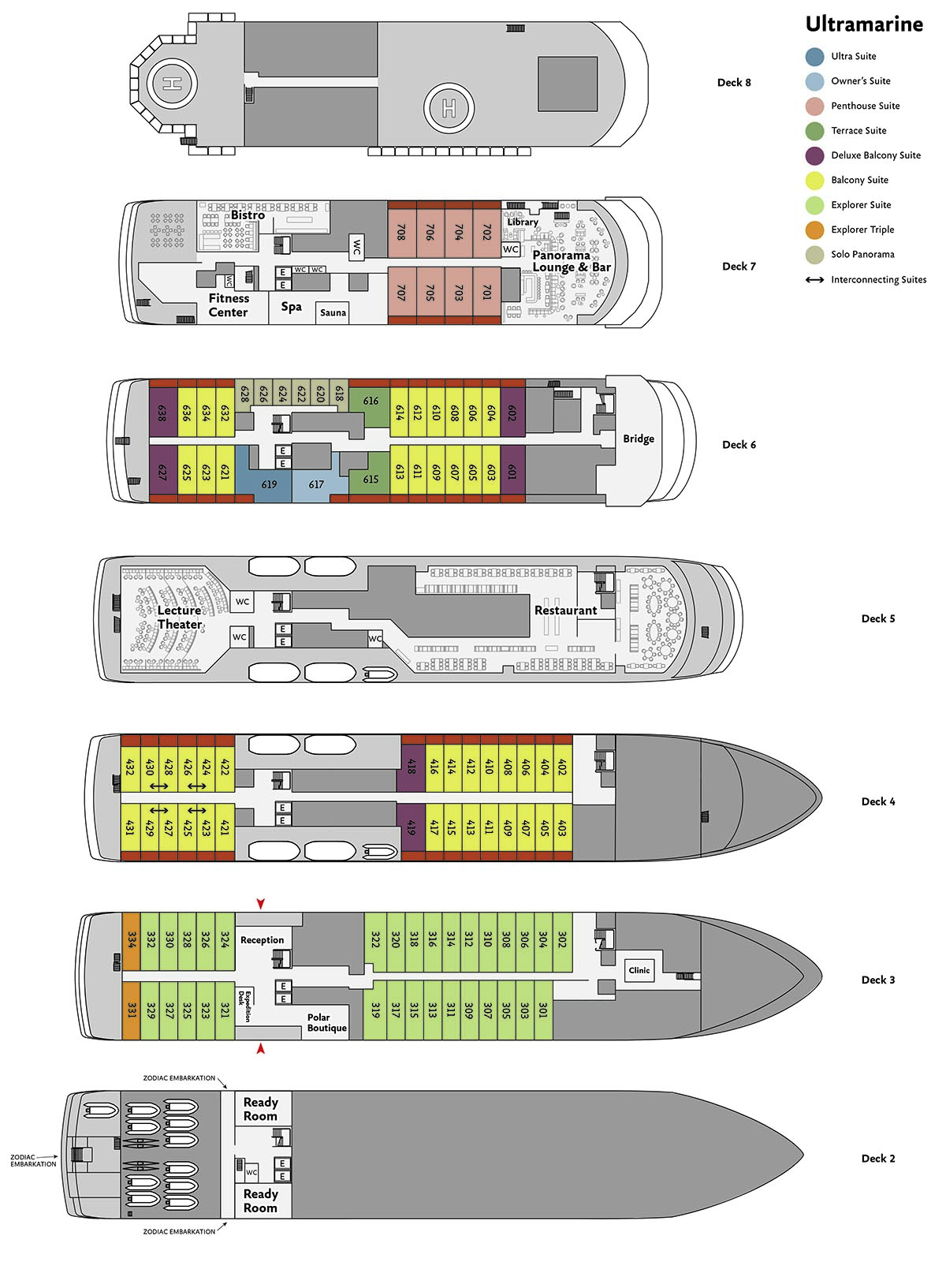 Included
Excluded
Rates and Share Bookings Prices shown are per person in US Dollars on a shared basis. If you are travelling alone and wish to share, you will be matched with someone of the same gender and pay only the share rate. If desired, Single occupancy is available at 1.7 times the twin share rate. Deposits Reservations require a deposit of 20% (minimum $1000 per person) at the time you receive a booking confirmation from Expeditions Online. A payment link will be sent to you and this may be paid by major credit card. Bookings within 120 days of departure require full payment. Final Payments Balances are due 120 days prior to departure and may be paid by bank transfer. Cancellations All requests for cancellation must be received in writing to Expeditions Online. Cancellations received 180 days or more prior to departure, are refunded less a fee of $1000 per person. If cancellation is received between 179 days and 120 days, the full deposit is forfeited. If cancellation occurs less than 120 days prior to departure, all payments are forfeited. If full payment has not yet been received, the full penalty will still apply and any unpaid balance is due immediately. We strongly recommend that you obtain adequate trip cancellation insurance. Booking Terms Please read carefully the Terms and Conditions for Expeditions Online (link at the bottom of this page). This voyage is operated by Quark Expeditions and you additionally travel under their terms and conditions as the operator as well as of the Shipping Company/transport carrier. Details will be forwarded to you at the time of booking.

Northwest Passage to Ellesmere and Axel Heiberg Is