King penguins (Aptenodytes patagonicus) were first discovered in the early 18th century by European explorers. After the Emperor penguin, with whom they are closely related, King penguins are the second largest of their species.

Antarctica may be the coldest, driest, windiest, and highest continent on Earth, but it’s also home to abundant wildlife, particularly penguins. King penguins (Aptenodytes patagonicus) were first discovered in the early 18th century by European explorers. After the Emperor penguin, with whom they are closely related, King penguins are the second largest of their species.

King penguins live on sub-Antarctic islands in the northern reaches of Antarctica, including the Falkland Islands, Tierra del Fuego, Prince Edwards, South Georgia and the South Sandwich Islands. Seeing these beautiful birds in their natural habitats is one of the highlights of a polar expedition cruise to Antarctica - they are absolutely fascinating creatures. And very photogenic!

The King penguin is perhaps the penguin we are most familiar with. They are extremely elegant with a distinctive silvery-grey plumage on their backs, a black-brown head, and striking gold colouring around the ears, neck, and on the underside of their beaks. On average, adult King penguins grow to 90cm tall and weigh approximately 15-16 kg. 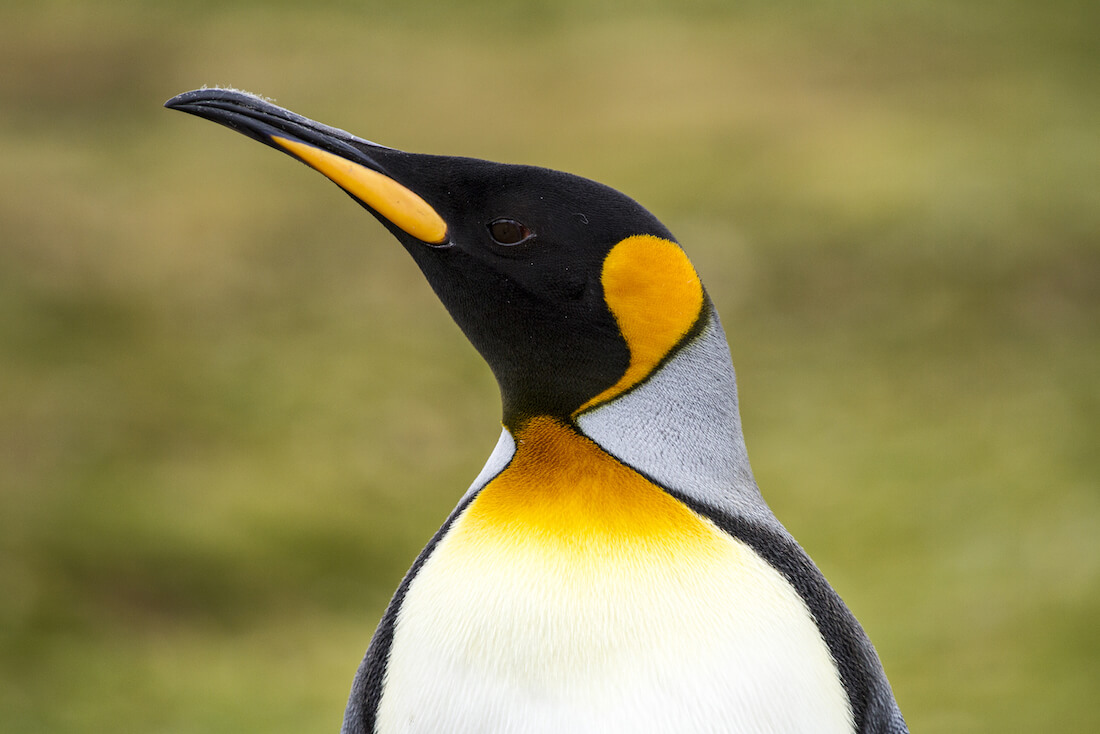 They have adapted incredibly well to the extreme conditions of the sub-Antarctic, thanks to their four layers of feathers. The first three layers are downy, providing effective insulation from the cold. The feathers on the outer layer, which only grow once the penguin reaches maturity, are oily and waterproof.

The King penguin diet consists of small fish and squid. Thanks to their longer flippers and sleek, hydrodynamic body, they are incredibly good divers, often reaching depths up to 300 metres whilst hunting their prey. This is much deeper than any other type of penguin. They can also stay submerged underwater for several minutes.

King penguins have also adapted to drinking salt water, unlike most animals, including humans. Their stomachs can separate the salt from the water, enabling them to drink without becoming dehydrated. This is incredibly beneficial given their habitat.

Aside from the characteristic (and adorable) penguin waddle we’re all familiar with, King penguins have a more efficient method of getting around—tobogganing! Basically, they slide along the ice on their stomachs, which is much faster and just as amusing to watch as they waddle.

King penguins usually live in very large, dense colonies, which sometimes consist of tens of thousands of individuals. By huddling together, the combination of body heat allows them to survive harsh winter temperatures and storms. They are prone to fighting with one another, but they tend not to interact with other species of penguins, even those with whom they share territory.

To attract a female, male King penguins use an arduous courting ritual, which can last anywhere from a few hours to a few days. When they are ready to mate, they will communicate by shaking their heads at the same time. The normal breeding age is between 3-6 years.

King penguins have the longest breeding cycle of the penguin species, lasting 13-16 months from, and they only have one chick at a time. Eggs are laid between November to April, with an incubation period of approximately 54 days. They will usually attempt to breed each year but are only successful every two or three years. 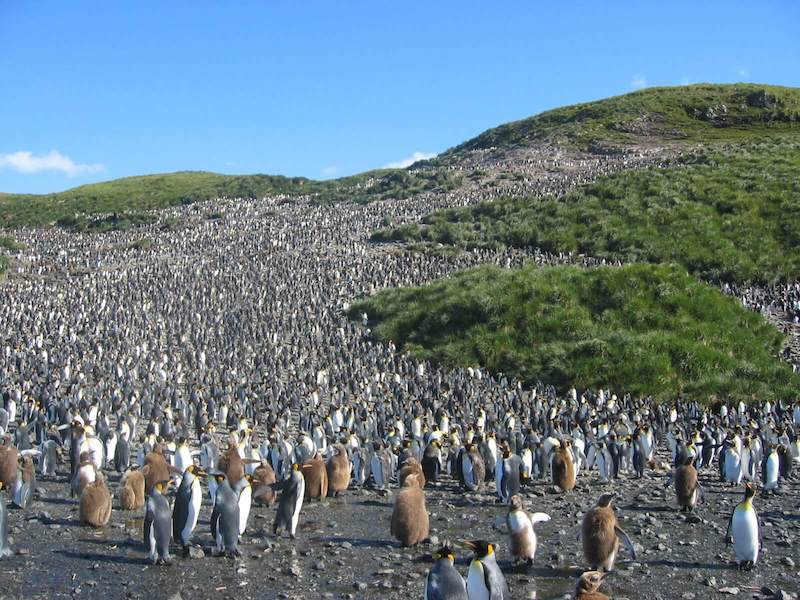 Unlike other species of penguins, they do not build nests. Instead, King penguins incubate eggs in a pouch above their feet, with both the males and females taking turns whilst the other is foraging for food. King penguins are extremely territorial and make excellent parents.

After the eggs hatch, chicks are balanced on their parents’ feet for warmth and protection. This guard phase lasts about 30-40 days until juveniles are able to keep themselves warm and protect themselves. At this time, they become very curious and begin to explore, forming into groups with other juveniles. Whilst in these crèches, a few adult penguins guard the chicks whilst the parents go in search of food for themselves and their offspring.

If you'd like to find out more on The Best Cruises and Expeditions to see Penguins or contact us directly, we'd be delighted to help you.