Polar Bears are the true beasts of the Arctic! Living in the harshest environment on earth, these tough bears are well adapted to their habitats, with dense fur, a thick layer of insulating fat, and black skin that absorbs the warmth of the sun.

Polar Bears are the true beasts of the Arctic! Found in the frozen wilds of Russia, Greenland, Svalbard, Norway, Canada, and Alaska, these humongous bears are the largest land carnivores in existence today, growing to 2.5 meters in length and weighing approximately 680kg (107 stone / 1,499 lb.) Living in the harshest environment on earth, these tough bears are well adapted to their habitats, with dense fur, a thick layer of insulating fat, and black skin that absorbs the warmth of the sun.

To help you understand these fascinating mammals a little more, here are 5 interesting facts about polar bears:

Polar Bear Fur is Not White

It always surprises people to discover that polar bears are not, in fact, white. Their water-repellent fur is actually transparent, and each strand has a hollow core. This aids insulation transmits the sun’s heat energy through the core to their skin, yet also reflects the general light, which helps the bears blend into their surroundings and avoid being detected by unsuspecting seals when they’re being hunted. Spitsbergen is one of the best places to see polar bears! Visit 'The land of the polar bear' with us on our North Spitsbergen trip! 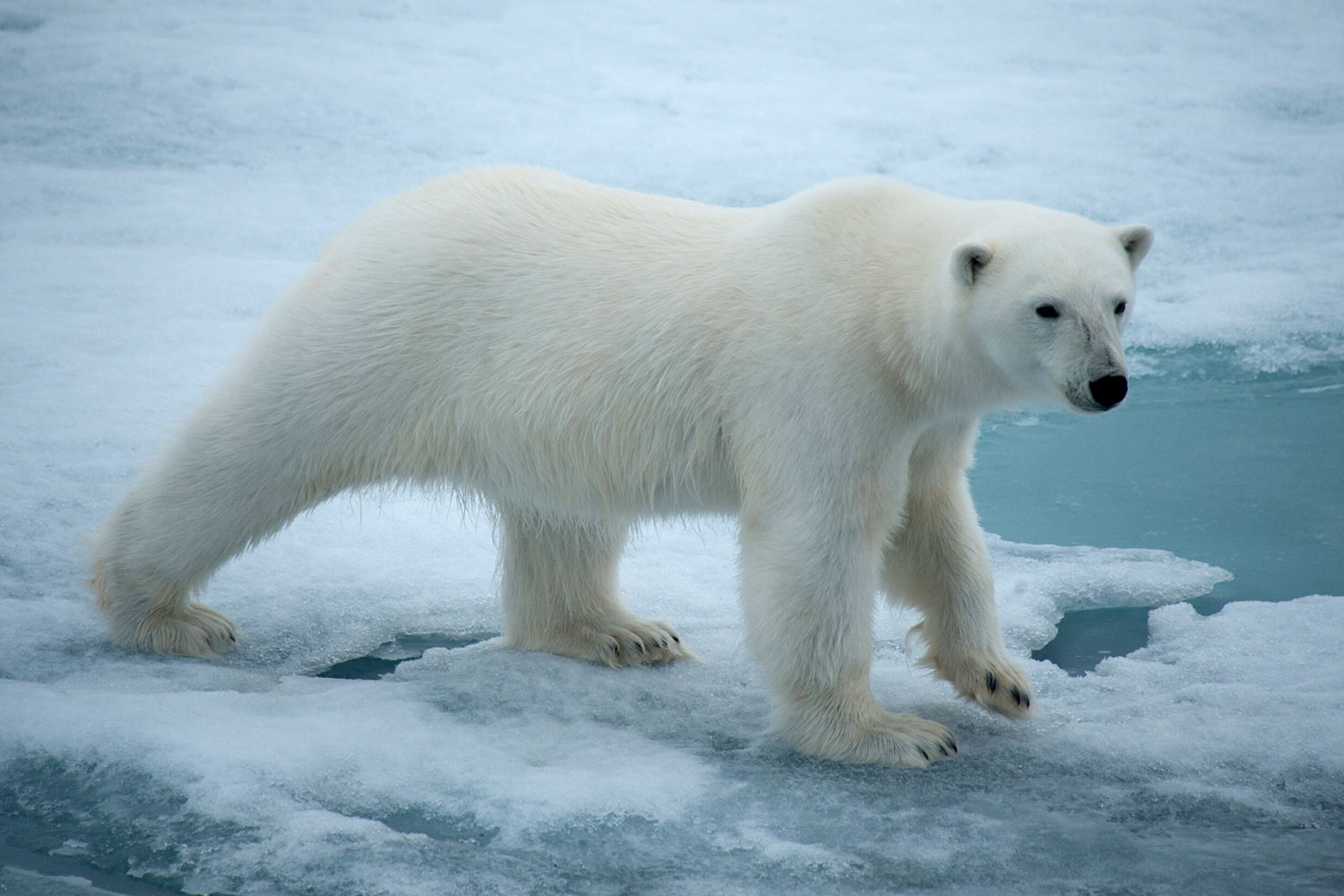 Classified as marine mammals, polar bears spend most of their lives on Arctic sea ice. Whilst not adept at enduring long distances in the water, they are nonetheless very strong swimmers thanks to their wide, slightly webbed paws.

Polar bears are often found in Arctic waters some 100km offshore, and they can sustain a comfortable swimming pace of approximately 10km/h. However, they’re usually not quick enough to catch seals in the water. 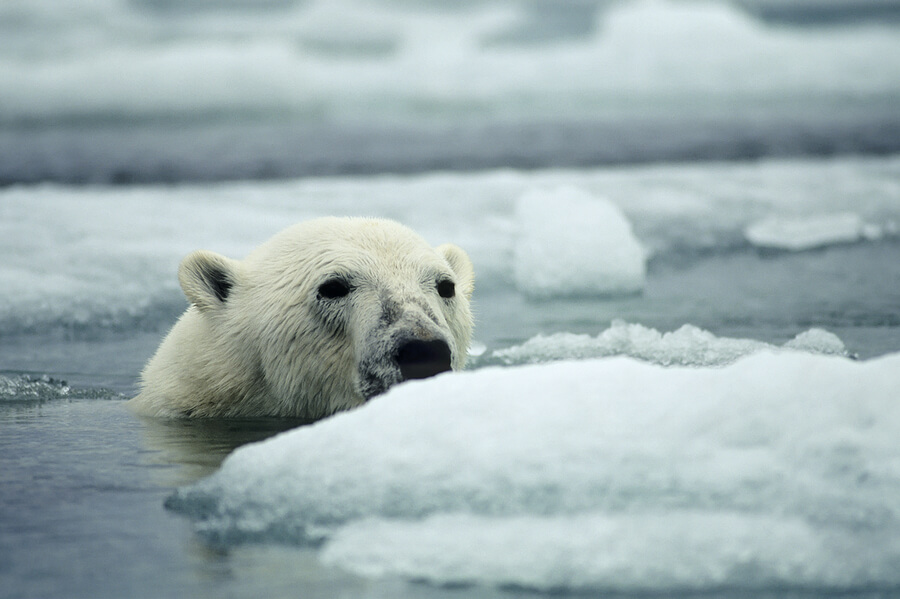 Polar Bears Spend More Than 50% of Their Time Hunting

Polar bears need to consume a huge amount of fat to survive. Their diet consists predominately of bearded and ringed seals, but they also eat walrus, bowhead and beluga whale carcasses, birds’ eggs, and sometimes vegetation.

With an incredible sense of smell, polar bears can track seals from some 16km away. They will travel great distances on land searching for food, and they may only catch one or two seals for every ten that they hunt.

Svalbard also provides an opportunity to see these magnificent creatures, so find out more about our Expedition Svalbard: Sea Endurance!

Polar Bear Cubs Are the Size of Guinea Pigs

Weighing just one pound and measuring approximately 12 inches (30cm), newborn polar bear cubs are absolutely tiny, which is quite surprising given the sheer size of adult bears.

Mating season runs from late March to May, the gestation period is around 8 months, and litters usually comprise 1-4 cubs. Around October and November, pregnant polar bears go in search of snow dens where they hibernate until it’s time to give birth, which is normally between November and January. 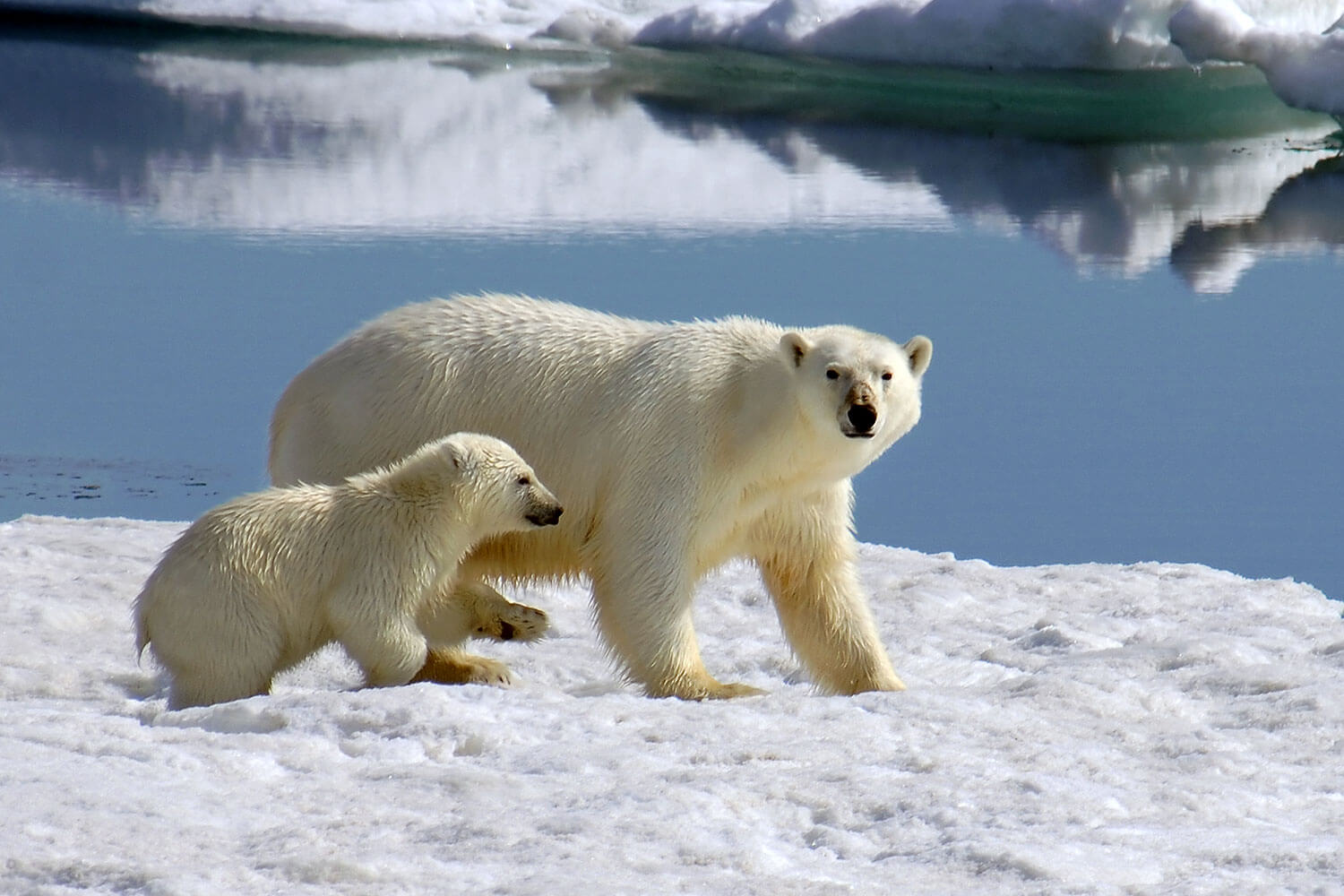 The mother and cubs will leave the den about four-five months later, at which time the cubs should be around 20-30 pounds. Cubs usually remain with their mother until the age of two, during which time they’ll learn the necessary skills to survive life in the harsh Arctic.

With the exception of breeding and rearing their young, polar bears do not hibernate during the winter months and they are usually solitary animals throughout adulthood.

Polar Bears Are an Important Indicator Species of Climate Change

According to the World Conservation Union (IUCN), there are 20,000-25,000 polar bears in the world. The loss of sea ice as a direct result of climate change is the most significant threat to their survival, followed by conflicts with humans, hunting, and industrial impacts. The ongoing and potential future loss of their sea ice habitat is an urgent issue for conservationists and led to the US listing polar bears as a threatened species in 2008 under the Endangered Species Act.

Many of our Arctic Cruises provide the opportunity to view polar bears in their natural habitat, as well as many other marine mammals such as whales, seals, and walrus. View all of our Arctic Expedition Cruises to areas such as Svalbard, Greenland, Canada, and the Russian Arctic! Get in touch if there is anything we can help you with!