This 11 night voyage to the Antarctic Peninsula sails further than the usual expedition in Antarctica, aiming to cross the Polar Circle. This border, at Latitude 66°33'S, marks the Antarctic Territory according to one of the definitions. South of the Polar Circle at Detaille Island in Crystal Sound is the farthest south that we will probably reach at Latitude 66°52' South. Sea mammals such as Killer Whales, Humpback Whales, Minke Whales, Leopard Seals, Crab-eater Seals and Weddell Seals are frequently seen in this area

Venture beyond the ordinary and discover the spectacular southern reaches of the Peninsula. Look out for marine mammals in the waters south of the Antarctic Circle!

This 11 night voyage to the Antarctic Peninsula sails further than the usual expedition in Antarctica, aiming to cross the Polar Circle. This border, at Latitude 66°33'S, marks the Antarctic Territory according to one of the definitions. South of the Polar Circle at Detaille Island in Crystal Sound is the farthest south that we will probably reach at Latitude 66°52' South. Sea mammals such as Killer Whales, Humpback Whales, Minke Whales, Leopard Seals, Crab-eater Seals and Weddell Seals are frequently seen in this area.
Day 1: Departure from Ushuaia In the afternoon, we embark in Ushuaia, Tierra del Fuego, Argentina, the southernmost city in the world located at the Beagle Channel and sail through this scenic waterway for the rest of the evening. Days 2 - 3: At sea During these two days we sail across the Drake Passage. When we cross the Antarctic Convergence, we arrive in the circum-Antarctic upwelling zone. In this area we may see Wandering Albatrosses, Grey Headed Albatrosses, Black- browed Albatrosses, Light- mantled Sooty Albatrosses, Cape Pigeons, Southern Fulmars, Wilson’s Storm Petrels, Blue Petrels and Antarctic Petrels. Near the South Shetland Islands, we spot our first icebergs. The Master of the vessel may decide to sail the narrow English Strait between Robert Island and Greenwich Island or Mc Farlane Strait between Greenwich Island and Livingston Island if the conditions are favorable. Then we might be able to enter Antarctic waters in the late evening of the third day and see Aitcho Island at the South Shetlands. If the conditions do not allow us to manoeuvre through the English Strait then we continue sailing South of Livingston. These volcanic islands or the South Shetlands are windswept and often shrouded in mist and fog, but do offer subtle pleasures. There is a nice variety of flora (mosses, lichens and flowering grasses) and fauna, such as Gentoo Penguins, Chinstrap Penguins and southern Giant Petrels. Days 4 - 9: Antarctica We may start our first day in Antarctica with a landing at Hannah Point, where we will find a nice variety of Gentoo Penguins, Chinstraps and southern Giant Petrels, as well as Elephant Seals hauling out on the beach. At Deception Island, we will try to land. Deception itself is a sub ducted crater, which opens into the sea, creating a natural harbour for the ship. Here we find hot springs, an abandoned whaling station, thousands of Cape Pigeons and many Dominican Gulls, Brown and South Polar Skuas and Antarctic Terns. Wilson’s Storm Petrels and Black-bellied Storm Petrels nest in the ruins of the whaling station in Whalers Bay. Good walkers may hike from Baily Head over the ridge of the crater into Whalers Bay, while our ship braves its entrance into the crater through the spectacular Neptune’s Bellow into the ring of Deception Island. On our way further South we will sail to Orne Islands with large colonies of Chinstrap Penguins and a beautiful view across the Gerlache Strait or to Cuverville Island, a small precipitous island, nestled between the mountains of the Antarctic Peninsula and Danco Island. It contains a large colony of Gentoo Penguins and breeding pairs of Brown Skuas. In Neko Harbour and Paradise Bay with its myriad icebergs and deep cut fjords, we have the opportunity to set foot on the Antarctic Continent. We shall have the opportunity for zodiac cruising between the icebergs in the inner parts of the fjords. We sail through the spectacular Lemaire Channel to Petermann Island offering Adelie Penguins and Blue-eyed Shags. We also try to land at Pleneau Island with Elephant Seals and fair chances to encounter Humpback, Minke and Fin Whales. We head south along the Argentine Islands to Crystal Sound, south of the polar circle. The landscape is very impressive with very high mountains and huge glaciers. At the Fish Islands we land at one of the southernmost Adelie Penguin and Blue-eyed Shag colonies in the Antarctic Peninsula. At Detaille Island, south of the Polar Circle, in Crystal Sound we reach probably our farthest south. Sailing north again through Neumayer Channel and Gerlache Strait, we arrive at the Melchior Islands with a very beautiful landscape with icebergs, where we may encounter Leopard Seals, Crabeater Seals and whales. Days 10 - 11: At sea On our way north we are again followed by a great selection of seabirds while crossing the Drake Passage. Day 12: Arrival in Ushuaia We arrive in the morning in Ushuaia and disembark. PLEASE NOTE: A typical itinerary to the Polar Circle & Antarctic Peninsula is illustrated below. All itineraries are for guidance only. Programs may vary depending on local ice and weather conditions, the availability of landing sites and opportunities to see wildlife. The final itinerary will be determined by the Expedition Leader on board. Flexibility is paramount for expedition cruises. 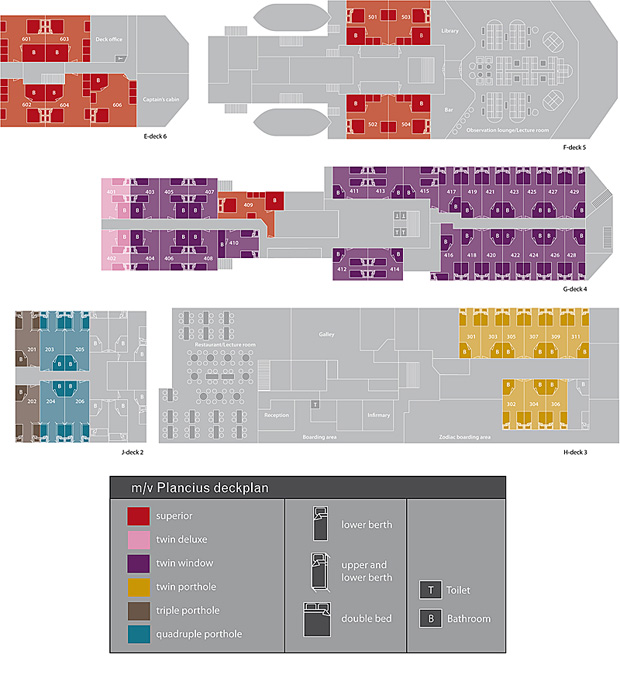